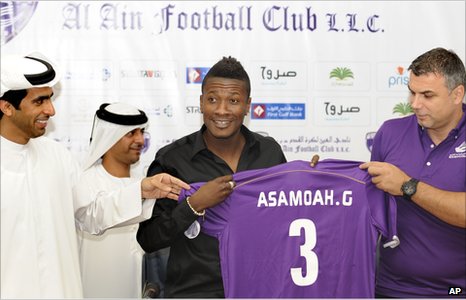 Gyan, who completed his high-profile move on Monday, was expected to make his debut this week.

But the 25-year-old has flown back to Sunderland to bid farewell and fly back to UAE on Thursday.Â

Olaroiu revealed at Monday's press conference that the striker will not take part in a derby match.

"We do not want to risk Gyan as he needs time to get used to atmosphere in the city of Al Ain and train with the team, we do not want to repeat the experience of Skoko, whom we played directly in the first game and got him exposed to injury in the game that immediately followed," Al Ain coach Cosmin Olaroiu said.

"We won't risk the player as we're still early in the season. However the player will participate in the cup games but not in the first game."

Gyan will however be ready for the tournament's second match against Dubai Club.

The UAE Pro League begins on 16 October and Al Ain open their campaign at home against Al Naser.