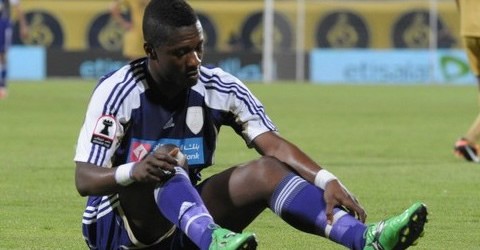 Ghana captain Asamoah Gyan could not find his scoring boots on Tuesday night as his Al Ain side suffered a 3-0 humiliation at Saudi side Al Hilal in the Asian Champions League first-leg semi-final tie.Â

Gyan led the UAE Pro League title-holders into the game with high hopes after inspiring their progress through the knock-out stages but was left disappointed as BrazilianÂ Thiago Neves scored in the 71st minute to add to aÂ Nasser Al Shamrani second-half brace to silence the visitors.

Al Ain had to finish the game at a player's disadvantage asÂ Khalid Essa was sent off after felling an Al Hilal attacker inside the box. The resultant penalty was squandered by Thiago Neves.

Gyan will have to inspire Al Ain to crawl from a 3-0 aggregate deficit in a fortnight time at theÂ Hazza Bin Zayed Stadium if they are to reach the final of the competition.

The Black Stars forward was crowned his side's top-scorer just days before the game but he failed to score to rescue their campaign.