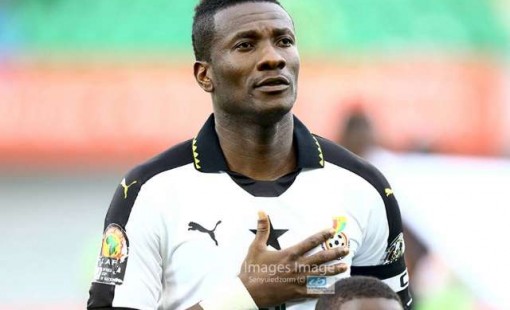 He came on for Isaac Boakye in the 62nd minute in a 2006 FIFA World Cup qualifier, three days before he turned 18 years; helping Ghana to win that game, and making him the youngest ever player to score for Ghana.

He scored four times in seven matches during that successful World Cup qualifying campaign. He was part of the 2004 Ghana Olympic squad, who exited in the first round, having finished in third place in Group B.

He also scored the fastest goal of the tournament after 68 seconds. The strike was also Ghana's first ever goal in the FIFA World Cup, coming in the game against the Czech Republic on 17 June at the RheinEnergieStadion in Cologne, Germany, which set the Black Stars on their way to a 2–0 victory.

He missed a penalty later in the game, and received a yellow card ruling him out of the final group game for trying to take the penalty too early. In Ghana's defeat to Brazil in the round of 16, he was sent off in the 81st minute after collecting his second booking of the match (for diving).

On 24 January 2008, during the Africa Cup of Nations, Gyan and his brother Baffour decided to walk out on the Black Stars following criticism after their unconvincing 1–0 win over Namibia.

The media learnt the brothers had packed their bags and were ready to leave the team hotel but were persuaded to stay by teammates.

In the 2010 African Cup of Nations, Asamoah Gyan helped a Ghana team, ravaged by injuries to the finals. Gyan scored three out of the four Ghana goals during the tournament.

Gyan scored with a penalty in the 85th minute of Ghana's first match of the 2010 World Cup against Serbia, in a 1–0 win. He hit the goalpost in the 92nd minute before being substituted to a standing ovation just before the final whistle.

In Ghana's second game, he scored a penalty in the 26th minute to level the scores and earn his team a 1–1 draw against Australia

In the round of 16 match against the United States, he scored a goal in extra time allowing Ghana to win 2–1 and hence become the third African team in history to qualify to the tournament's quarter final, after Cameroon and Senegal.

In the quarter final tie against Uruguay, following Luis Suárez's handling of the ball on the goal-line, he missed a penalty kick with no time remaining at end of extra time, hitting the crossbar and necessitating a penalty shootout to decide the game. He converted his kick in the subsequent penalty shootout, but Uruguay went on to win the shootout 4–2.

Gyan scored Ghana's equaliser against England at Wembley in the international friendly on 29 March 2011.

Ghana went on to lose 1–0. After missing that penalty kick, Gyan decided to take an "indefinite break" from international football. On 8 May 2012, he announced his return to the Black Stars team.

In the team's opening match, he captained the Black Stars against the United States in a 2–1 defeat.

He scored his first goal of the tournament in a 2–2 draw with Germany, equaling Roger Milla's record of five FIFA World Cup goals.

In the final group match, he became the top African goalscorer in World Cup finals history by scoring the Black Stars' goal as they were defeated 2–1 by Portugal.

At the 2015 Africa Cup of Nations, Gyan missed Ghana's opening match, a 2–1 loss to Senegal, with a "mild bout" of malaria.

He returned for the second match, scoring a last minute winning goal against the tournament favourite Algeria in a 1–0 win for the Black Stars.

An international exile lasting over a year was ended in October 2018 when Gyan was called up to the Ghanaian squad for a pair of 2019 Africa Cup of Nations qualification matches versus Sierra Leone.