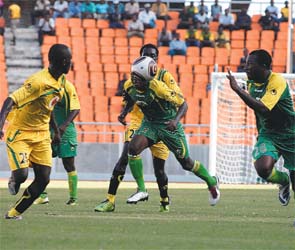 Ghanaian striker Kenneth Asamoah struck twice to steer his team to a 4-2 win over Toto African in a Vodacom Premier League match at the National Stadium on Wednesday.

He now tops the scoring with seven goals, one ahead of John Boko of Azam, and two ahead of Simbaâ€™s Ugandan striker Emmanuel Okwi.

Asamoah's double and two more goals from midfielder Haruna Niyonzima and striker Jerry Tegete in the poorly attended match enabled the titleholders to go third in the league table for at least 24 hours.

Yanga had to wait until the 18th minutes to break the stalemate through Niyonzima.

Toto African, one of the less fancied teams that made a bright start to the season, were far from impressive yesterday.

It came as no surprise when Yanga made it 2-0 three minutes later through a superb header by Asamoah off a neat pass by Shamte Ally.

In the 15th minute, Tegete, a son of Toto Africanâ€™s head coach John Tegete, stretched the hostsâ€™ lead with a tricky shot for a 3-0 half time lead.

It was the strikerâ€™s first goal this season.

On resumption, Toto African came out a more aggressive side and pulled one back in the 82nd minute through Mohammed Soud.

Celebrations that greeted the goal had hardly died down when Asamoah came into the picture again in the 85th minute, this time with a sizzling shot.