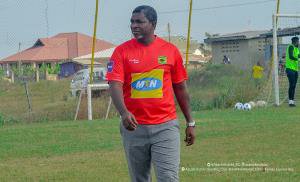 Asante Kotoko has directed head coach Maxwell Konadu to reduce his technical team as the club begins preparations ahead of the next Ghana Premier League season.

According to Oyerepa FM, the new management of the Porcupine Warriors gave these directives to the coach this week.

The club is currently undergoing massive changes under newly appointed Chief Executive Officer Nana Yaw Amponsah with the focus being on the playing and technical body.

The former Black Stars B coach is currently assisted by three coaches, Johnson Smith, who joined the club from Ghana Premier League side Karela United, Akakpo Patron and Abdulai Gazale and has been told to pick one out of the three.

Konadu is likely to settle on Abdulai Gazale as he recommended him when he joined the club as head coach.

Asante Kotoko has confirmed their participation in next season's CAF Champions League.