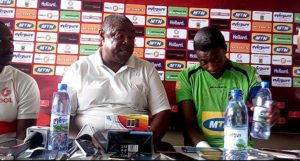 Asante Kotoko coach Samuel Paa Kwesi Fabin has expressed his delight over his outfit's performance in their 1-1 draw against Simba SC in the Simba Day ceremonial match on Wednesday.

Despite being inactive for two months following the suspension of the Ghanaian top flight league, Asante Kotoko were able to hold the Tanzanian champions to a 1-1 stalemate at the Uhuru Stadium in Dar es Salaam.

Striker Obed Owusu shot the Porcupine Warriors in front on the stroke of half time after tapping in a rebound from Michael Donkor's shot before Emmanuel Okwi equalised for the hosts on 77th minute.

Goalkeeper Felix Annan saved a crucial penalty by the 84th minute to save Kotoko from losing the game.

"It was a nice game for the two clubs and I'm very proud with the superb performance of the players despite the situation we find ourselves in currently back home," Fabin said.

"We started the game very well and I was impressed with how the players conducted themselves on the pitch. Although we almost lost it in the second half but our goals saved the situation.

"Simba have a good team and I think they will admit that we gave them a tough battle in front of their supporters and that will help them in their preparations for the new season in Tanzania," he added.