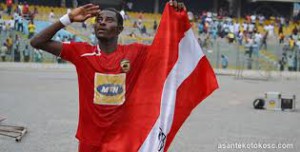 Instrumental Asante Kotoko center back Ahmed Adams remains positive of his side’s chances of winning the 2015/16 Ghana Premier League despite their opening day loss at WAFA.

The Porcupine Warriors shockingly drowned at WAFA by 2-0 with goals from sensational attacker Charles Boateng and inspirational winger Samuel Tetteh.

But Kotoko’s best defender last season insists that there are more matches than what has been played and the Porcupine Warriors will bounce back.

Speaking in an exclusive interview with GHANAsoccernet.com, Ahmed Adams, 24, said they will pick good points from the remaining 29 matches.

“Sure In Sha Allah we can win the league. This just the first match and is not over yet because we have 29 matches more to play.

Losing our first game is not the best but it doesn’t mean we have lost our focus in winning the league,” Ahmed said.

Asante Kotoko will be playing their next two matches with AshantiGold and Medeama SC and will be hoping to pick maximum points in those two matches to restore hope in their fans.