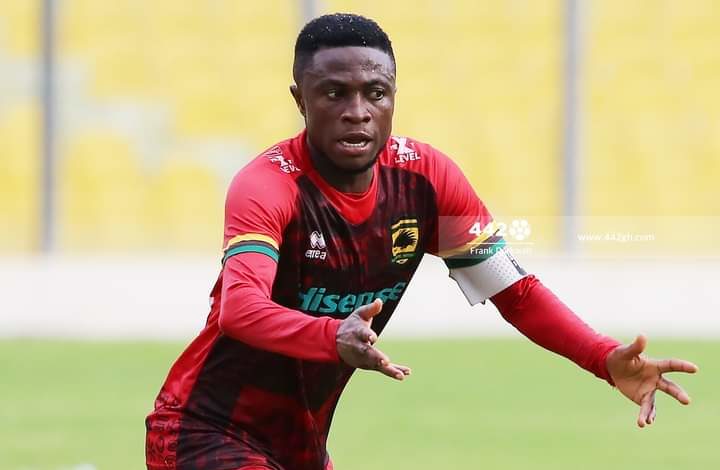 Asante Kotoko winger Emmanuel Gyamfi has been referred to the Disciplinary Committee of the Ghana Football Association following his tackle on Inter Allies midfielder Andy Okpe.

The Porcupine Warriors snatched all three points from Inter Allies at the Theatre of Dreams in this matchday 29 fixture which ended 3-2.

Emmanuel Gyamfi exhibited unsporting behavior in the game against Inter Allies as he deliberately stepped on Inter Allies midfielder Andy Okpe which was captured live on video.

The Ghana FA after reviewing the incident has referred the player to the Disciplinary Committee for sanctions.

Gyamfi is said to have breached Article 34(6)(d) of the GFA Premier League Regulations.

“Emmanuel Gyamfi: You: on 14th of June 2021, during the match between Inter Allies FC and your team at the Theatre of Dreams, did stamp player number 45m of Inter Allies (Andy Okpe) in an off-ball situation around the 65th minute of the game, an action which in the opinion on the association is an improper and likely to bring the game into disrepute”.

Emmanuel Gyamfi is hereby charged for a breach of Article 34(6)(d) of the GFA Premier League Regulations, 2019.

Article 34[6][d] of the Ghana PremierLwague regulations states “In addition to matters referred to in any other regulation, it shall be misconduct if a club, Director, official, Referee, Assistant Referee, or Player or member is proved to have done or permitted or assisted any of the following to be done: [6][d] Commit any offensive act not provided for above or make any offensive statement either verbally or in writing or is responsible for any conduct or any matter which is in the opinion of the Association, ungentlemanly, insulting or improper behavior or likely to bring the game into disrepute”.