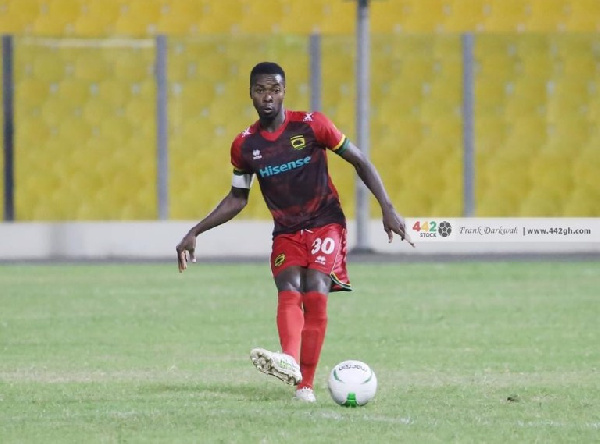 Asante Kotoko SC defender Abdul Ganiu Ismail has expressed his delight to lead the Porcupine Warriors as the new captain.

The stalwart has been rewarded with the armband to lead the new era of the club following his impressive spell since he joined the club.

Ismail signed a new two-year contract on Wednesday which will see him at the club until 2023.

In the absence of Felix Annan and Emmanuel Gyamfi who have departed from Kotoko, the role as captain has been handed to the highly-rated player by new head coach Dr. Prosper Narteh Ogum and his technical staff.

Goalkeeper Razak Abalora and midfielder Mudasiru Salifu will be deputies to the central defender.

"Another platform to enjoy the teaming support of the Red Army and most importantly putting on the famous Red shirt," Ganiu posted on his official Twitter page.

"I also take this opportunity to wholeheartedly accept the new responsibility placed on me as a leader."

The 25-year-old was outstanding in the Red shirt last season in the Ghana Premier League where he made 33 appearances and scored 4 goals.

He was named man of the match on two occasions which earned him his first Ghana appearance in March.

Ismail made his debut for the Black Stars when they drew with South Africa in a 2019 Africa Cup of Nations qualifications.