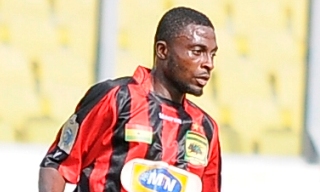 Asante Kotoko defensive duo Louis Quainoo and Ofosu Appiah have rubbished reports linking them away from the club.

The contracts of the two players run out in four months and reports of an imminent move to Medeama SC are just refusing to wash-away.

Full-back Qainoo was instrumental in the first half of the season but fell down the pecking order to Sabato Mohammed and Yaw Frimpong.

It is widely reported he is not keen to renew his contract due to lack of first team action but he has water down on the report insisting he's committed to the porcupine warriors.

''I have not taken any decision although I have four months left on my contract with Kotoko,'' Quainoo told the Kotoko Express Newspaper.

Centre back Appiah is also believed to be unsettled at the club after returning from suspension.

But the impressive defender is coy on his club future.

''I have not said anything like that. I have not taken any decision on that.''