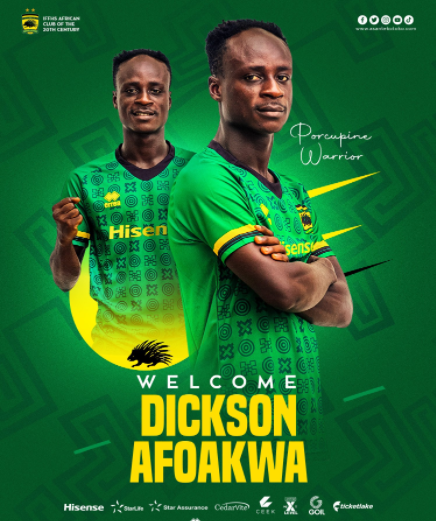 Ghanaian giants Asante Kotoko has announced the signing of Dickson Afoakwa on a three-year deal.

The 23-year old joins the club as a free agent following a successful trial.

The offensive player has been training with the Porcupine Warriors under the supervision of Dr. Prosper Narteh Ogum in preseason.

The former Dinamo Brest player has impressed the technical handlers and has been handed a three year deal to revive this career.

📝 DEAL DONE: We have completed the signing of winger Dickson Afoakwa. The offensive player joins as a free agent on a three-year deal.#WelcomeYawDic🤝#AKSC #DicksonSigns #TogetherWeBuild pic.twitter.com/zHnm0ZfEoC

Dickson Afoakwa has been without a club for the past two years since he last played for Belarusian club Dinamo Brest and was sent on loan to FC Gomel.