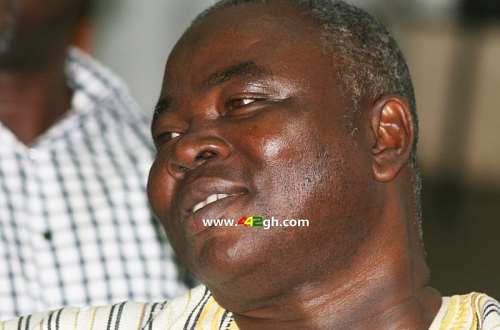 Ashantigold deputy chief Executive Albert Commey has landed himself in BIG trouble after making a wild claim of matches being manipulated on the final day of the Ghana Premier League.

The  Match Commissioner for the Confederation of African Football (CAF) made a sensational claim in the local media on Monday several top-flight matches were fixed on the final day of last season.

He accused several clubs of manipulating results including giants Hearts of Oak - which has sparked outrage in the West African country.

He claimed that the match between the Phobians and Real Tamale United, which ended 4-1 in favour of the latter, was fixed.

RTU entered the game desperate for three points. It was their only hope of avoiding relegation from the top flight and they recorded a shocking result to stay up.

He also claimed that the match between his own AshantiGold and Bibiani GoldStars, in which Yaw Annor scored two goals to win the golden boot, was fixed.

With claim of match-fixing gaining currency in the local media, the claim by the top official further damages and completely obliterate the local football brand.

The former Eleven Wonders Chief Executive has been dragged to the Ghana FA's Ethics Committee to provide proof for his wild allegations - which appears to have damaged the integrity of the league.

Commey's club AshantiGold are fighting their demotion to the country's lower-tier league after being found guilty of match fixing two seasons ago.

Ashanti Gold and Inter Allies have been relegated to the third tier of Ghanaian football, with players and officials of both clubs also sanctioned for match-fixing.

A Ghana Premier League game between the two sides in September 2021 ended 7-0 to Ashanti Gold, with Hashmin Musah scoring two own goals as he claimed to try and prevent a pre-arranged 5-1 scoreline.

Musah's claims and notifications of suspicious betting patterns were investigated by the Ghana Football Association (GFA), who have found both teams guilty of match manipulation.

As well as both teams having to play Division Two football next season, several club officials, coaches and players were banned from football.

The most severe sanction was given to Inter Allies volunteer Emmanuel Nii Amoah, also known as Nii Gogo, who was barred for life for his role in the fix.

Musah himself was banned for two years but his sanction was reduced to six months for his role in "unravelling" the fixed match.

However, Musah was "warned not to take the law into his hands" and reminded of his duty "to disclose any such occurring to the GFA" through its integrity hotline.

Four other men - the respective head coaches and team managers from both clubs - were all banned for two years.

Fourteen Ashanti Gold players were suspended for between two and four years and the club's sporting director was also given a four-year ban.

As well as Musah, a further 11 Inter Allies players and their goalkeeping coach were suspended for between two and three years.