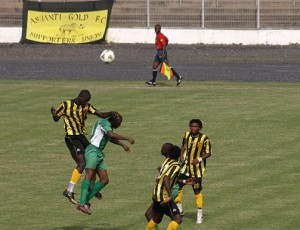 The quartet arrived in South Africa on Thursday have already begun training with the clubs.

AshGold CEO Kudjo Fianoo told GHANAsoccernet.com "They arrived last night. They will stay with the club for trials and hopefully sign with them the club.

He added that: "For Eugene Owusu Prempeh, he was invited by an agent who has assured him of a contract with a Premier club in the country. He has not been invited a specific club."