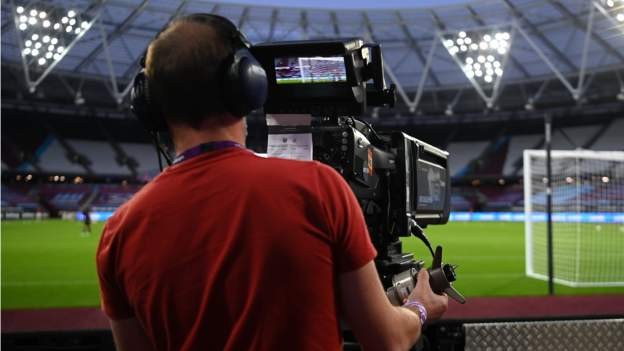 The five fixtures per round not shown live are available on BT Sport Box Office or Sky Sports Box Office at £14.95

Newcastle owner Mike Ashley has called for the Premier League to review its pay-per-view live matches in the UK.

Ashley voted in favour of the current agreement, which requires fans to pay £14.95 to watch individual fixtures.

"This was because there were no realistic or any viable alternatives put forward to enable supporters to watch matches," he said.

"Charging £14.95 for single televised matches in the current climate it is not acceptable to any football fan."

With Premier League fans unable to watch their teams inside their stadiums since March because of coronavirus, clubs agreed the current "interim solution" this month.

They voted 19-1 in favour of the move, with Leicester City the only club to oppose it.

The cost of each match has been criticised and some fans have chosen not to use the service, with many preferring to donate to charity instead, raising more than £300,000 from the nine games so far.

The pricing will be debated at a Premier League shareholders meeting on Tuesday.

"Supporters have overwhelmingly rejected this offer and the Premier League must now act," Ashley said.

"Why not make it much more accessible at £4.95 per match until Christmas?

"The Government should waive VAT on the above pay-per-view matches so that as many of those who are unable to attend matches in person can at least watch their team.

"The profit from the above reduced-price pay-per-view option, I would suggest that 50% would be retained by Premier League and 50% would go to the football pyramid below."