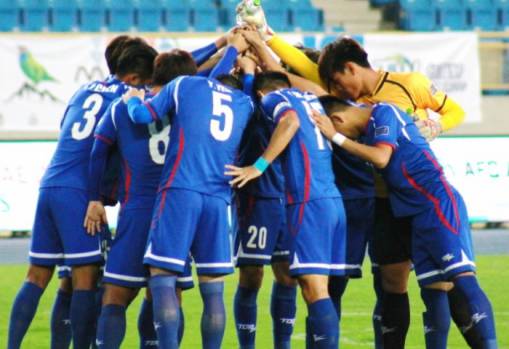 New Taipei City: Gary White takes Chinese Taipei into their AFC Asian Cup 2019 qualifier with Bahrain on Tuesday confident his new charges can launch a late bid to qualify for the Finals in the United Arab Emirates.

Englishman White took over at the helm in mid-September with Chinese Taipei in third place in Group E, just a point behind second placed Turkmenistan as the qualifying campaign enters its second half later this week.

“We’re still in it,” says White. “We’re third in the group and although Bahrain are running away with it, there are two teams who qualify so we still have a chance.

“We have one more game at home after this (against Singapore) and we also have to go away to Turkmenistan. When we play Bahrain we want to show that we have improved. The first aim is to get a result on Tuesday.”

Bahrain lead Group E with seven points from their first three games, but the battle for second is wide open with Turkmenistan on four points, Chinese Taipei on three and Singapore in fourth with two points from a pair of draws.

Singapore travel to Ashgabat to take on Turkmenistan in the other game in Group E after the teams shared a 1-1 draw on Matchday Three.

The Bahrainis comfortably won the previous meeting with Chinese Taipei in Riffa in September, but White is hoping to put his experience on the international stage to good use against the Gulf state.

The 43-year-old famously took Guam on a historic sequence of results last year that saw the islanders secure a place in the qualifying rounds for the AFC Asian Cup, only for a lack of funds to bring their run to an end.

From there, he shifted to China to work with second division side Shanghai Shenxin, where he encountered a number of Chinese Taipei’s current squad and worked in an environment that boasted some of the most astute minds in the game.

“In China you have a lot of strong foreign players coming into the second division and I coached against people like Clarence Seedorf and Fabio Cannavaro,” he says.

“I also coached against many of the players in our squad last year and that has helped me get to know the team quicker. Having players like that also helps bring up the quality of the squad, but we’re also looking at bringing in other players.”

To do that, White is looking to tap into the overseas-born Chinese Taipei community.

“We have Tim Chow, who plays in the Scottish Premier League for Ross County, and he’s almost ready to join us, and of course we already have Yaki Yen and Xavier Chen,” said White.

“When you bring in players of that level in, then it helps the other players. It raises the level tactically, technically and those players have good knowledge and their fitness is higher than the other players. The domestically based players see that and they raise their own standards. It helps everyone.”

White celebrated his first win as Chinese Taipei coach on Thursday with a 4-2 victory over Mongolia and he is confident the team can be a success if the players show the same attitude he instilled within his Guam squad.