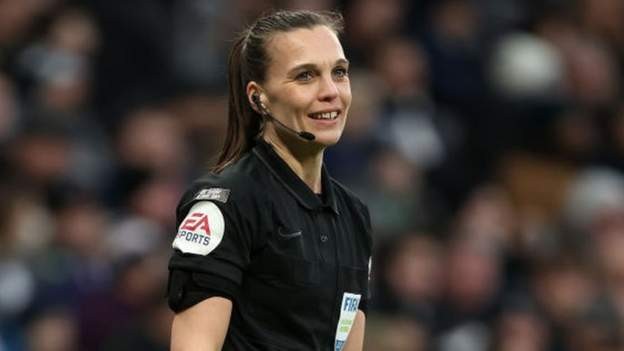 Natalie Aspinall says she feels "incredibly proud" of becoming the third Premier League female assistant referee this weekend, something she was told she could never achieve.

The 40-year-old will officiate Wolverhampton Wanderers versus Fulham on Saturday.

Aspinall is following in the footsteps of Wendy Toms and Sian Massey-Ellis.

"I wasn't going to let somebody tell me that I couldn't do it because of who I was," Aspinall told BBC Sport.

"When you work hard for so long for something and then you finally achieve or realise that dream then it's something I'm incredibly proud of."

Natalie Aspinall has been an English Football League official since 2016

Aspinall has been promoted to the top flight after six years in the English Football League.

She has officiated three women's FA Cup finals - once as a referee and twice as an assistant - and at the 2011 and 2015 women's World Cups.

"For me, trying to get to the Premier League is something that I was always told I couldn't do; that I couldn't be involved in professional football. It's something I've worked hard to do," Aspinall added.

"I don't feel like I'm an inspiration - I just feel like I'm doing what I'm doing, but I hope that by me doing this it makes it easier for, not just female referees, but any referees to come through the pathway and achieve their potential."

Aspinall, who is from Blackpool, got into officiating as a child when her father, who was also a referee, told her she could earn more doing that for an hour on a Sunday than a paper round.

Now she hopes her achievement of becoming a Premier League official will encourage her two daughters that they can become whatever they want to be.

"But I think, for me, I'm teaching my children a really important message that as a female you can achieve anything."

A legendary musician joins Desert Island Discs: John Legend shares the soundtrack of his life Vernon Kay brings you dancefloor classics: Go on a nostalgic trip back to the summer in the '90s