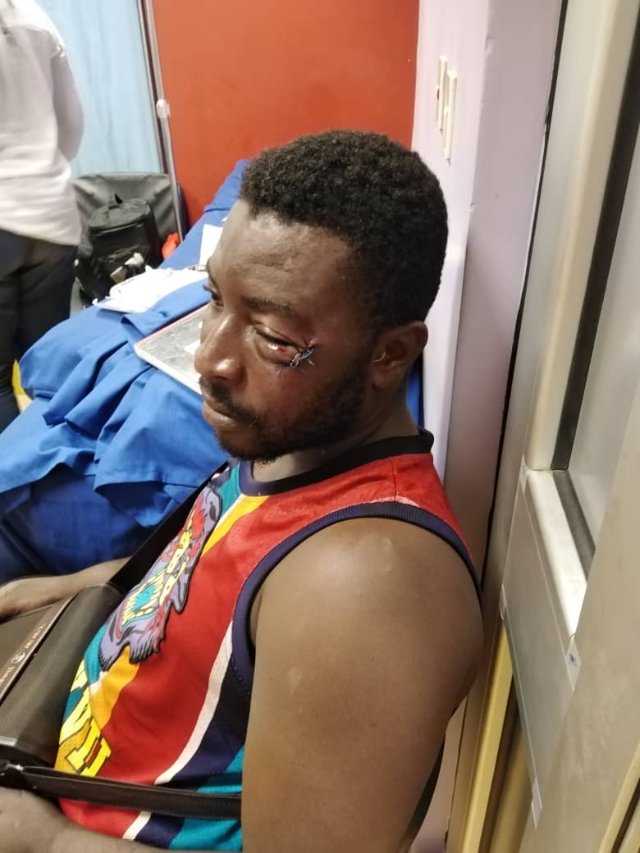 The fan who was pummeled by Patrick Allotey

Michael Siaw, the Asante Kotoko fan who was assaulted by boxer Patrick Allotey, has broken his silence since the incident occurred on Sunday afternoon.

Mr. Siaw was captured on video being beaten mercilessly by former WBO Africa Super Welterweight champion during the Super clash between rivals Hearts of Oak and Asante Kotoko at the Accra Sports Stadium.

The shameful conduct has sparked outrage on social media as Mr. Siaw, who was clouded in a Kotoko shirt suffered a technical blowout after being handed hefty punches by the boxer.

It's unclear what sparked the confusion, but the boxer is now facing sanctions from the Ghana Boxing Authority and other global organisations.

On Monday, family and manager of the boxer visited Mr. Siaw and pleaded that the case be withdrawn from the Odorkor Police Station where the victim lodged a complain.

Narrating the ordeal on Kumasi-based Oyerepa FM, Mr. Siaw claimed he did nothing to provoke the boxer.

"I didn't even know he was a boxer, it was after the video went viral that I got to know."

"Sincerely I did nothing provoking to merit such assault from him,I was only jubilating when Kotoko scored, that was when he approached me to leave his presence and before I realized, he had hit him."

"His manager and family members have being here that I should withdraw the case so we settle it amicably but am yet to meet my dad so we decide."