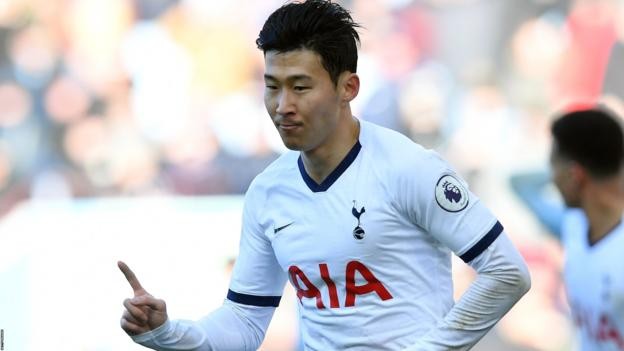 Son Heung-min's stoppage time goal gave Tottenham a last-gasp victory in an entertaining game at Aston Villa and took the visitors up to fifth in the Premier League table.

The result means Jose Mourinho's side have leapfrogged Sheffield United and are now a point behind fourth-placed Chelsea, who have a game in hand.

Villa, who remain a point above the bottom three in 17th, made the stronger start and took the lead via Toby Alderweireld's own goal - with the Spurs defender prodding Anwar El Ghazi's cross past goalkeeper Hugo Lloris.

The Belgian atoned for his error by equalising with a superb angled effort that flew into the top right corner of the Villa goal from 10 yards.

Spurs, who always looked dangerous in attack, went in front when Steven Bergwijn won a penalty after being fouled by home defender Bjorn Engels.

Son's initial spot-kick was saved by Villa goalkeeper Pepe Reina, but the South Korean forward followed up to score and become the first Asian player to reach 50 Premier League goals.

The hosts responded after the break with Engels heading in from a Jack Grealish corner to level the scores.

However, another Engels mistake allowed Son to race clear late on to place the ball past Reina as Villa's miserable run against sides in the top half of the table continued.

While Dean Smith's side have earned just one point against sides currently in the top half, a wider concern for the Villa boss is that eight of their 15 defeats this term have been by a solitary goal.

This was another occasion on which they could have taken at least a point from a hard-fought contest but for individual errors - with Engels having an afternoon to forget.

The 25-year-old Belgian, who started because of Tyrone Mings' absence through illness, had a difficult time dealing with the movement and pace of Bergwijn, Son and Lucas Moura.

It was his rash challenge on Bergwijn that allowed the visitors to go in at the interval with the lead in a game Villa had enjoyed the better of until then.

In his late lapse, Engels allowed the ball to run under his studs, enabling Son to score the decisive goal. Engels' first goal for the Midlands club will have provided little consolation.

Villa had enjoyed a bright start as Grealish imposed himself on the game.

The Villa captain, who is the last survivor from the club's top-flight relegation in 2016, delivered a wonderful display, which is unlikely to have gone unnoticed by the clubs that are reportedly keen to sign him this summer.

He spent the early stages of this encounter tormenting Serge Aurier, flashing a shot wide and laying on a glorious chance from which Douglas Luiz should have converted.

Now 24, Grealish is maturing into a player capable of controlling games, and is exhibiting the sort of form that may bring him into England manager Gareth Southgate's planning for Euro 2020.

While Grealish is yet to make a senior England appearance, Spurs midfielder Dele Alli is someone Southgate knows all about - although his last cap came in June 2019.

Since then, Alli has suffered form and injury problems, but has appeared rejuvenated since Jose Mourinho took charge of Tottenham in November.

Although he did not add to the eight goals he has scored this season, his intelligent running caused Villa problems throughout.

Son had seven of Tottenham's 23 efforts on goal, with Alli next on five - including some of their best chances.

'It was a real fight' - Mourinho on Aston Villa win

Kortney Hause's superb block prevented him from equalising at 1-0 down, and Alli stretched as he headed Bergwijn's cross back across goal but wide of the right far post.

The 23-year-old then badly miscued a right-foot shot before half-time, slicing it wide, but he continued to pop up in dangerous areas after the break, teeing up Son for an effort that was brilliantly saved by Reina.

Villa's Spanish keeper made two further outstanding stops to prevent the South Korean from adding to his goal tally.

Like Alli, Son kept plugging away, and his reaction to Engels' late mistake was the reward for a high-energy performance that included 26 sprints, more than any other player on the pitch.

Tottenham boss Jose Mourinho to BBC Sport: "I thought we deserved to win but I think they did not deserve to lose. Villa played to win."

On the Spurs penalty: "Steven Bergwijn, I don't know if I call him naive or too honest - the referees tell us pre-match, 'Don't ask for anything, don't surround me, don't do the motion of the screen'. The action was there and it was a question of to be or not to be, and clearly it was."

On Alderweireld's contribution: "In a funny way I'd say he's scored three goals: the own goal, his goal and then when he loses the duel with Engels. But he scored with a shot of his life."

On the opportunity to get into the Champions League by finishing fifth after Manchester City's ban: "Not just for us. A window opens for many teams. What seemed far, now the fifth place is not far. Arsenal, Everton, Sheffield United, Wolves, everyone will feel they have the chance."

Aston Villa manager Dean Smith to Sky Sports: "We have to try and take the positives. The last two games we've scored late winners here, so now we know how it feels on the other foot. We had chances to win the game but we weren't clinical enough.

"They have a front four that can hurt anyone, that's why we had to get forward and defend on the front foot. On the whole, I thought we dealt with them really well but we're disappointed with the goals we conceded.

"We probably gave away too many chances from counter attacks, which they're good at, but we didn't deserve to lose that. It was a good performance against a team that are fifth in the league but we deserved more than that."

On VAR awarding Spurs a penalty: "No-one in the stadium thought it was a penalty - not even the player who went down. It took two minutes to come to the decision, which shows it wasn't clear and obvious. Why [referee] Martin Atkinson doesn't walk over to the monitor and have a quick look I don't know. In my opinion they've turned over a good decision by the referee."

Aston Villa are without victory in their last 10 Premier League matches against sides from London (D1 L9), since a 1-0 win over Crystal Palace in January 2016. Tottenham have lost just one of their last 19 matches against Aston Villa in all competitions (W15 D3), losing in the Premier League in April 2015 (0-1). Tottenham are unbeaten in their last 23 Premier League away games against promoted sides (W19 D4), since a 0-1 loss at QPR in April 2012. Son Heung-min's goal after 93 minutes 34 seconds is Spurs' latest winning goal in the Premier League since August 2009, when Aaron Lennon netted after 94 minutes 24 seconds against Birmingham. Jack Grealish has had a direct hand in 13 goals in the Premier League this season (7 goals & 6 assists), five more than the next Villa player and more than any other English midfielder. The Aston Villa midfielder has provided more assists in all competitions in 2019-20 than he has in any other season in his career (8). Son became the first Asian player in Premier League history to reach 50 goals in the competition (51 in total after his brace). Indeed, he's the sixth Spurs player to reach this milestone after Teddy Sheringham, Robbie Keane, Jermain Defoe, Harry Kane and Christian Eriksen. Toby Alderweireld became the third Tottenham Hotspur player to score for and against his own side in the same Premier League game, after Gareth Bale vs Liverpool in November 2012 and Chris Armstrong vs Arsenal in March 2000.

Aston Villa travel to Southampton in their next Premier League outing on Saturday (15:00 GMT).

Tottenham host RB Leipzig in the last 16 of the Champions League on Wednesday (20:00 GMT) before their next Premier League game at Chelsea on Saturday (12:30 GMT).

Lucas Moura (Tottenham Hotspur) wins a free kick in the defensive half.

Attempt missed. Giovani Lo Celso (Tottenham Hotspur) left footed shot from outside the box is high and wide to the left. Assisted by Steven Bergwijn following a set piece situation.

Marvelous Nakamba (Aston Villa) is shown the yellow card for a bad foul.

Attempt saved. Giovani Lo Celso (Tottenham Hotspur) right footed shot from the right side of the box is saved in the bottom left corner. Assisted by Serge Aurier.

Frederic Guilbert (Aston Villa) is shown the yellow card for a bad foul.

Steven Bergwijn (Tottenham Hotspur) wins a free kick in the attacking half.

Attempt saved. Son Heung-Min (Tottenham Hotspur) left footed shot from the left side of the box is saved in the bottom right corner. Assisted by Giovani Lo Celso.

Lucas Moura (Tottenham Hotspur) wins a free kick in the defensive half.

Attempt missed. Lucas Moura (Tottenham Hotspur) header from the centre of the box misses to the left. Assisted by Giovani Lo Celso with a cross following a corner.

Dele Alli (Tottenham Hotspur) wins a free kick in the attacking half.