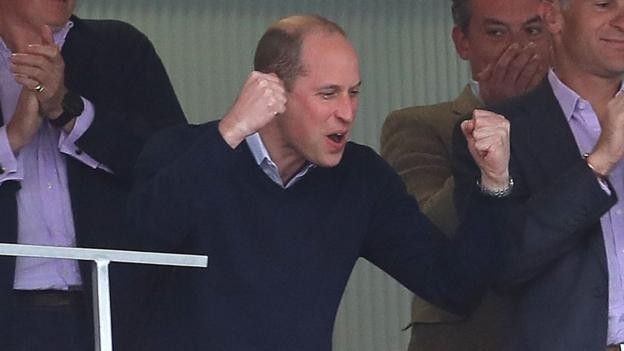 Prince William lived every twist and turn as Aston Villa secured their return to the Premier League with a 2-1 play-off final victory against Derby at Wembley.

The Duke of Cambridge previously told BBC Sport he decided to support Aston Villa while at school because he wanted to be different to his friends who followed the likes of Manchester United and Chelsea.

He instead opted for a "middle of the table" side that would give him "emotional rollercoaster moments" and a team he could connect with.

Though William admitted he should have perhaps made an alternative choice to give himself an easier ride, his experience at Wembley on Monday most likely justified his decision.

It was all going perfectly to plan when John McGinn added to Anwar El Ghazi's goal to give Villa a 2-0 lead after 59 minutes.

But Martyn Waghorn's late response for Frank Lampard's side set up a nail-biting finale - and one that ultimately brought the Prince much closer together with former Villa striker John Carew.

We look forward to seeing similar scenes on Match of the Day next season!

It's tense in the early stages...

Two goals to the good and the Prince is enjoying the game with former Villa striker John Carew, but the emotional rollercoaster was just getting started...

There was a tense finale in store for Villa and the Duke of Cambridge as Derby fought back...

Aston Villa's social media team may have got slightly carried away