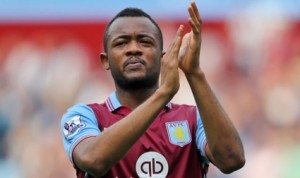 Aston Villa striker Jordan Ayew could be tempted into a big-money move to China, with rich-mega club Shanghai SIPG keen to break bank to bring the Ghanaian.

The ambitious Chinese outfit have registered their interest in the striker, who has struggled this season, The Birmingham Mail reports.

Representative of Ghana international have been busy discussing his future with reports suggesting he may have played his last game for the Villans.

Villa could buckle under pressure to sell following the huge financial benefit to the club as they will recoup the £10m Villa paid for his services.

Reports say the former Marseille man could be tempted to go in for the money as the Chinese pursuit gains momentum.

The striker is on away on international duty with Ghana ahead of the 2017 Africa Cup of Nations in Gabon which starts on Saturday.

He has been far from convincing this season, scoring just nine goals in 51 appearances.