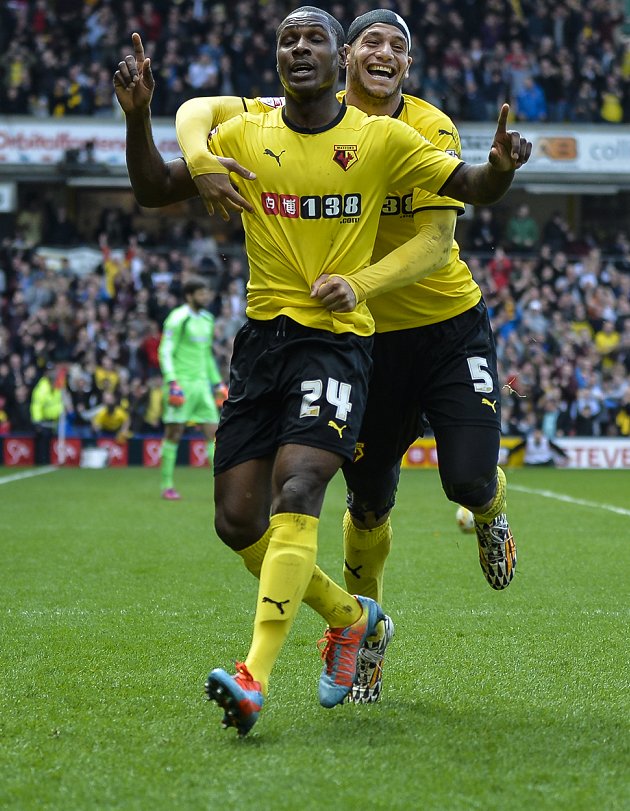 Aston Villa have slumped to yet another defeat as their Premier League campaign begins to fall away even further.

Remi Garde's side were beaten 3-2 at home by Watford who inflicted a 11th league loss on the bottom-placed West Midlands outfit.

Orion Ighalo, who now has eight goals this season, opened the scoring in the 17th minute with an opportunistic finish from a deflected Ben Watson attempt before Villa hit back four minutes prior to half-time when captain Micah Richards got on the end of Jordan Veretout's floated free-kick to powerfully head past Heurelho Gomes.

Gomes was stretchered off with just under 25 minutes remaining after he collided with teammate Craig Cathcart but that did not upset Watford's momentum as they went ahead in the 69th minute when Alan Hutton flicked the ball beyond his own keeper Brad Guzan and into the back of the net as he attempted to beat Ighalo to Troy Deeney's through ball.

Quique Sanchez Flores' Hornets then went two goals ahead when Deeney looped a header over Guzan in the 85th minute before Jordan Ayew produced a stellar strike from the edge of the area to reduce the deficit for Villa.

- Can Villa get any luck at all this season? An improved showing on the heavy loss at Everton but still plenty of work to do under Garde if they want to steer clear of the bottom three.

- Watford rolling along nicely under Flores. Will they continue to defy the critics and push towards the top half?

Villa will be desperate to get on the winners list when they head to Southampton next weekend as Watford get set to host fellow top flight returnees Norwich City at Vicarage Road.

Massive 3 points enjoy your weekends feet up and enjoy the boxing back to work tomorrow pic.twitter.com/6rmVGFaCPl
— Troy Deeney (@T_Deeney) November 28, 2015

Hi everyone, thanks for the messages,really appreciate I'm much better now, my Neck still very stiff, but I will be fine! On my way home!
— HEURELHO GOMES (@hdgomes) November 28, 2015

“We lack efficiency in both boxes and maybe we had lack of patience because we knew it was important to win. It is difficult as obviously we have a lack of confidence both defensively and offensively.

"It is not a criticism but everybody has to improve their levels, and we can."

Watford's Flores on the on-field relationship of Ighalo and Deeney:

"It's amazing the connection they had during the match. They are able to play on the long ball or on the floor. They cope well with whatever way we play.

"It's amazing what they are doing different."

STATS SPECIALS
*Thanks to Opta

3 - Alan Hutton has scored his third own goal in the Premier League, the only Scottish player to score more is Colin Hendry (4). Oops.
— OptaJoe (@OptaJoe) November 28, 2015

5 - Aston Villa have the joint-fewest points of any team in any season in Premier League history after 14 matches. Struggle.
— OptaJoe (@OptaJoe) November 28, 2015