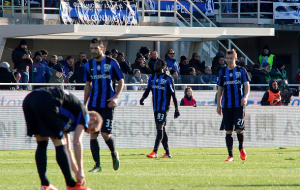 Juventus travel to the Stadio Atleti Azzurri d’Italia on Sunday afternoon to face an Atalanta side in desperate need of a victory.

La Dea have yet to record a single win since the turn of the year and after their impressive start to campaign, and where there was once talk of a possible European push, there is now a growing fear that Edy Reja’s outfit could be dragged into a relegation battle.

The Bergamo club currently reside ten points outside the drop zone and have struggled to cope with the winter departures of German Denis and Maxi Moralez.

Alessandro Diamanti has impressed since his switch from Watford, however, and his side were unfortunate not to take all three points from their away clash with Carpi last weekend.

Jasmin Kurtic broke the deadlock shortly after the interval but Reja was left seething when the referee awarded the Biancorossi a spot-kick for what appeared to be an innocuous challenge.

Juventus, meanwhile, have consolidated their position at the summit of the Serie A table after they edged the showdown with Napoli last month.

The Partenopei have taken only two points from a possible six since their defeat at the Juventus Stadium and the Old Lady moved three points clear at the top with a 2-0 victory over Inter in the Derby d’Italia on Sunday evening.

The Bianconeri’s 15-match winning streak was halted with a goalless draw against Bologna a fortnight ago but Massimiliano Allegri’s side remain unbeaten since October 28 when a Nicola Sansone free-kick for Sassuolo compounded Juve’s early-season misery.

That malaise seems like a distant memory after Juve reached consecutive Coppa Italia finals for the first time since 1960 with a semi-final success over Inter in midweek.

The Stadio Atleti Azzurri d’Italia has proven a happy hunting ground for the Old Lady in recent years having collected maximum points in Bergamo since Atalanta’s return to the top-flight.

Alejandro Gomez is a doubt ahead of the clash alongside Rafael Toloi for the hosts.

Juventus, in the meantime, will be without midfield fulcrum Claudio Marchisio, Martin Caceres and Kwado Asamoah. Giorgio Chiellini is also expected to miss out after limping off in midweek.