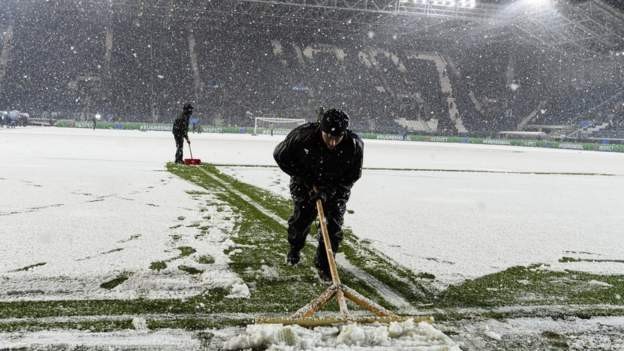 Atalanta and Villarreal are in Manchester United's Champions League group

Atalanta's final Champions League group match against Villarreal was postponed on Wednesday because of heavy snow.

It is hoped the match will now be played on Thursday.

The winner of the Group F encounter in northern Italy will progress to the Champions League knockout stages alongside Manchester United, who have already won the group.

English referee Anthony Taylor called off the match having at first delayed the kick-off for 20 minutes.

Players were ready, pitchside, in their kits, but the snow kept falling, persuading the officials to make their decision.

Atalanta said on social media that the game would now take place on Thursday, with Uefa yet to determine a kick-off time.

This match has been postponed to play at a later date.

Lineups are announced and players are warming up.