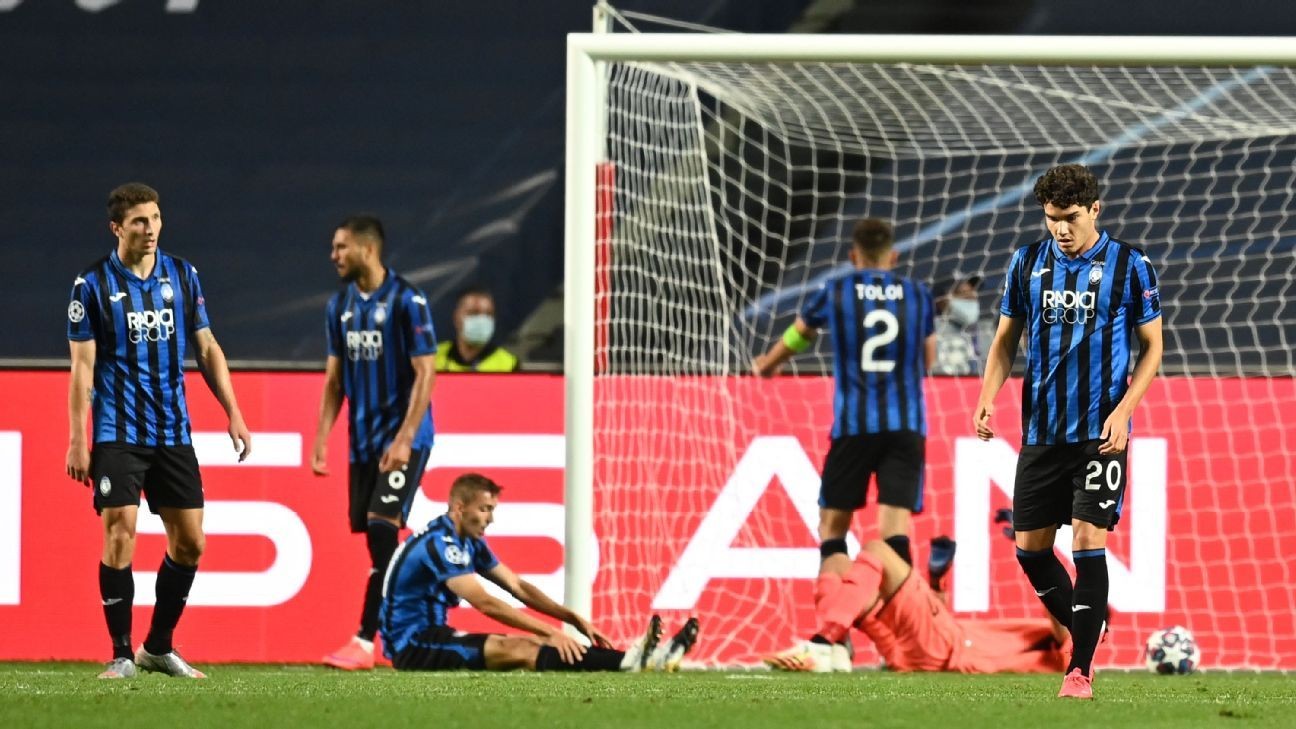 In a football sphere defined and dominated by super clubs -- whether legacy institutions, or generously bankrolled nouveau riche -- it's tempting see the tale of Atalanta as the classic underdog story, using ingenuity, creativity and, above all, fearlessness to shake up the established order in both the Champions League and Serie A. And because we've all become cynical and hard-hearted (hey, it's 2020) we're not surprised they crashed back to Earth when Paris Saint-Germain scored two late goals to defeat Atalanta 2-1 in the quarterfinals of the Champions League.

First and foremost, there is a legacy left behind. Anybody who watched Atalanta this season will have learned a different way of playing and winning.

Manager Gian Piero Gasperini showed that with a bit of organization and a ton of courage and self-belief, a team with limited resources can be daring, entertaining and successful. The simple notion of wanting to outscore and outwork and outrun at all times is hugely liberating to any footballer. When dropped into the right framework, it turns average footballers into good ones, and good footballers into great ones. The difference between, say, a Duvan Zapata and a Harry Kane or Robert Lewandowski is not as great as we are led to believe. Only Manchester City and Bayern Munich -- clubs with wage bills 10-15 times as high -- outscored them in Europe's Big Five leagues this season.

Bayern should smash Barcelona and Messi, but can you ever count the Catalans out?Champions League, Europa League fixtures scheduleLiverpool Keep or Dump: Should the champions sell captain Henderson?

There's something to learn here. The old notion whereby "you can't invent anything new in football" has been debunked yet again.

But this is more than just a brilliant, if sometimes prickly and difficult, manager and his footballing utopia come to life. It's also about catching lightning in a bottle, channelling a process of planned growth and unexpected breaks through the filter of a proud and, frankly, unique city and its fan base.

Bergamo sits a mere 15 miles away from Milan, home to two of Italy's three best supported clubs, but has never allowed itself to be swallowed culturally or economically by Italy's biggest, wealthiest metropolitan area. This is a place with its own dialect, cuisine, and sense of belonging: you've probably heard the story how babies born in the province are given an Atalanta shirt and their parents asked to commit to raising them as Atalanta fans.

Atalanta's last-gasp defeat against PSG won't diminish the legacy of this proud Italian team and the blueprint they've laid for other teams hoping to compete with the elite on a fraction of the budget. Michael Regan - UEFA/UEFA via Getty Images

"People say we have limited resources and sure, some are limited, we can't spend as much as others on salaries or transfer fees," Gasperini said after the PSG defeat. "But we have other resources that are limitless in this city. Things like passion, enthusiasm, a capacity for hard work. They matter too."

Indeed they do. This is the bastion of the fightback against the super clubs.

Mattia Caldara was the only homegrown product on the pitch at the start of the game on Wednesday, but in the past they've produced plenty and there are plenty more in the pipeline. Gasperini's decision with 10 minutes to go to send on Jacopo Da Riva, a 19-year-old with a single minute of first team action under his belt, was a sign of what's to come.

The COVID-19 horror story that enveloped the city in March only added a layer of pathos to their journey. Many, from fans to players, never wanted to start playing again, not while the stench of death and the pain of loss hung heavy over their city's turrets and alleys. At its lowest point, when the local paper's obituary pages looked like this, the notion of football seemed as distant as ever. But by the end of March, the message had changed, beautifully encapsulated by videos like this one: "I'll be reborn ... you'll be reborn."

It was against this backdrop that Atalanta returned to play last month, rattling off their run to third place in Serie A. And it was with the trauma of death on their doorstep that they took the field against PSG and, for 90 minutes, flirted with a place in Europe's Final Four.

Still, they were smiling afterwards, from Gasperini to Mario Pasalic to Luca Percassi. They know what they achieved. They know what it means. And they know it won't end here. And even if he doesn't, the example they set, the lessons they taught football about self-belief and creativity, ingenuity and courage, planning and hard work, well, those will live on regardless.