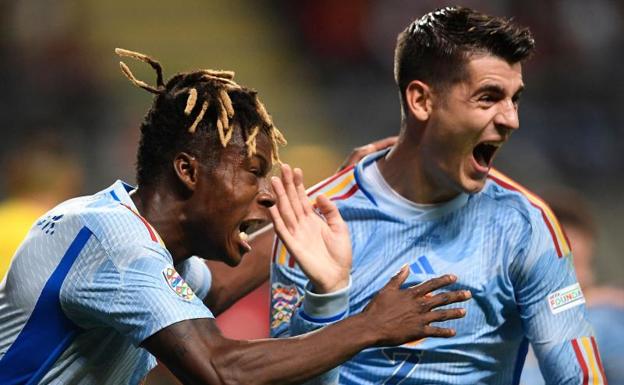 Athletic Club forward Nico Williams says he’s honoured to play for Spain after picking them ahead of Ghana.

In his second game with the Spanish national team, Nico Williams was decisive in leading Spain to repeat the 'final four' of the League of Nations and the young Athletic winger has already become a firm candidate to be part of the team that will go to the World Cup in Qatar.

The 20-year-old assisted Alvaro Morata to score the decisive goal as Spain beat Portugal 1-0 in Braga to advance to the Nations League last four.

"For me, it is an honour to be here. Helping the team and being here is a dream for me. Morata has told me that the goal is mine, but I have seen him there alone and I have thought of passing it to him, "said Nico.

When Nico Williams was asked if the responsibility weighed on him, he replied forcefully: "I think I'm doing well. Little by little I am growing as a player and as a person. He also revealed what the coach had demanded of him: "Luis Enrique has told me to be brave, to face up, to be myself, and that's how it has been."

His wish now is to represent Spain in the World Cup, but he acknowledged that it does not depend only on him. "To go to the World Cup, it's the coach's decision, but hopefully I can be there," said Nico Williams, praised by Luis Enrique and all his teammates.

"Nico, in his second game, has been key with Carvajal's pass to the centre. I only had to push her," said Álvaro Morata. When we have to give the size, we give it. We are a good group and we deserve it. It has been a difficult game. I stay with the attitude of this team".