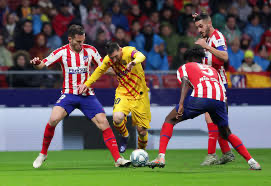 Atlético Madrid have been boosted by the return of midfield trio ahead of their LaLiga clash against Granada on Saturday.

Atlético Madrid are enduring a difficult campaign, having lost their four matches and drawn one, including a shocking defeat against lower-tier side Cultural Leonesa in the Copa Del Rey.

However, Diego Simeone has received a good news of the return of his skipper Koke after the Spanish midfielder was passed fit.

Koke is expected to partner Saúl Ñíguez and Thomas Partey in the heart of midfield when the Rojiblancos welcome Granada to the Wanda Metropolitano on Saturday evening.

The Argentine coach will be able to count on the three after almost two months, because the few minutes that coincided in the Super Cup did not help, and will thus align his core of confidence, which has given him his best results.

Their presence is practically synonymous with efficiency because with the three on the pitch the Red and Whites have only lost three games this year, adding twelve wins and seven draws.