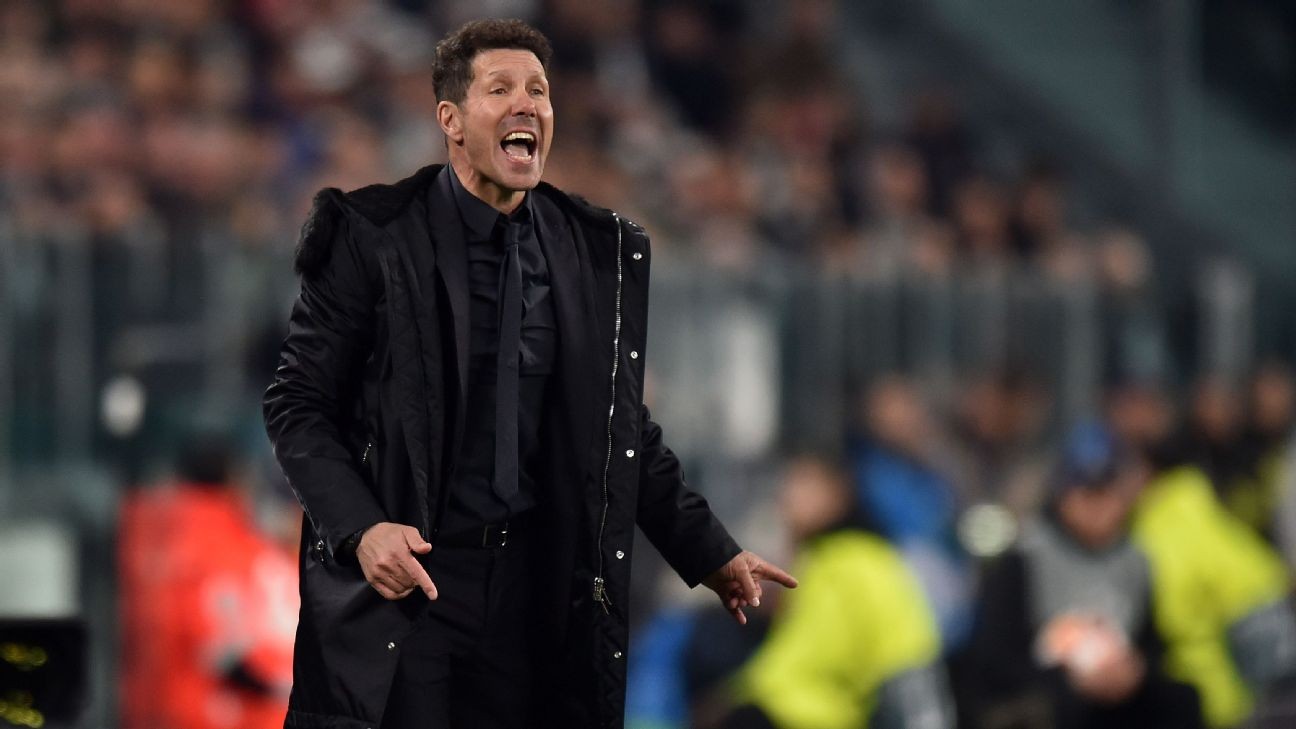 La Liga releases a video to thank those still going to work amid the coronavirus crisis in Spain. Sid Lowe details the next steps for La Liga to complete the season in the midst of the coronavirus outbreak.

Atletico Madrid's players and manager Diego Simeone, the highest-paid coach in the world, have accepted a 70% pay cut as the club deals with the economic impact of La Liga's indefinite suspension and Spain's state of emergency due to the coronavirus pandemic.

The club released further details on Thursday of the financial steps they plan to take after last week's announcement that they would be presenting an ERTE, a measure that allows Spanish companies to reduce staff wages in emergencies.

"The first team squad and coaching staff understand the club's need to present an ERTE, respect its conditions and accept the resulting financial impact on their incomes," Atletico said in a statement. "All members of the first team have reached an internal agreement with the club that defines two different scenarios depending on the final outcome of the 2019-20 season. The filing will mean a 70% reduction in the salaries of coaches and players of the men's first team, the women's first team and Atletico Madrid B, while the state of emergency lasts."

Atletico Madrid also revealed that the agreement would see the first-team squad and club directors supplement the salaries of the 430 workers who would have lost out as a result of the ERTE, with players and executives contributing 50% each.

ESPN spoke to two Atletico Madrid employees working in different parts of the club who expressed their gratitude at the decision from players, coaches and directors.

A source close to Simeone told ESPN that he and his players were keen to help staff who had worked so hard over the eight years the coach has spent at the club.

Simeone is the best-paid manager in world football, earning a gross annual salary of around €42 million.

The measures taken by Atletico Madrid follow a similar move announced by Barcelona's players, who are also taking a 70% pay cut and contributing to the salaries of club employees.

Those decisions contrast with several Premier League clubs such as Tottenham Hotspur, Norwich City and Newcastle United, who have faced criticism for cutting the wages of staff during the pause in matches, while making no reduction to players' often multi-million-pound salaries.

Bundesliga clubs including Bayer Leverkusen, Borussia Moenchengladbach, Schalke 04 and Hoffenheim have also imposed pay cuts on players in order to adjust to their fall in income while there are no matches.

Fellow La Liga clubs Espanyol and Alaves have also announced that they will be presenting ERTEs to temporarily cut their wage bills in recent days as the impact of coronavirus on Spanish football's finances becomes clear.

ESPN has been told that at present, and unless circumstances change, Real Madrid have no plans to take similar measures.

Clubs have been paid the money they are due under La Liga's broadcasting agreements until the end of May, but they nonetheless have been hit by a lack of matchday revenue and other commercial opportunities.

Juventus took a similar measure with the players and manager agreeing to a four-month pay cut this past weekend, which will save the Italian champions €90 million in the 2019-2020 financial year. Juventus is worth $1.512 billion, according to Forbes and the club's highest-paid player, Cristiano Ronaldo, earned $109m last year.

On Wednesday, British politicans took the Premier League clubs to task for not adapting similar measures.

The mayor of London and the chair of the Department for Culture, Media and Sport committee (DCMS), have blasted clubs such as Tottenham, Newcastle and Norwich who have furloughed non-playing staff while footballers continue to earn full salaries.

"It sticks in the throat," Julian Knight, the chair of the DCMS said. "This exposes the crazy economics in English football and the moral vacuum at its centre."

Meanwhile, Sadiq Khan, the Mayor of London, added: "My view is always that those who are the least well off should get the most help.

"Highly paid football players are people who can carry the greatest burden and they should be the first one to, with respect, sacrifice their salary, rather than the person selling the programme or the person who does catering or the person who probably doesn't get anywhere near the salary some of the Premier League footballers get.

"It should be those with the broadest shoulders who go first because they can carry the greatest burden and have probably got savings, rather than those who were in catering or hospitality who have probably got no savings and live week by week and who probably won't get the [government] benefits for five weeks."

On Monday, Manchester United said they are confident they are under no pressure to ask players to take pay cuts.