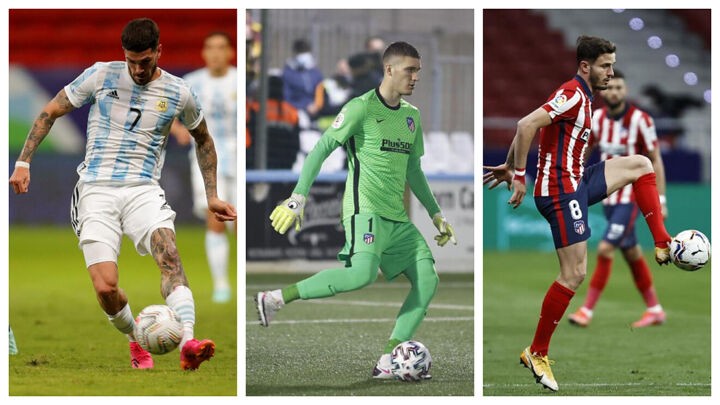 Atletico Madrid are just two weeks away from the start of their pre-season preparations, which are set to begin on July 7, but the club need to tie up a number of issues before they can focus on next season.

Los Colchoneros lifted the LaLiga Santander trophy just a month ago, but if they are to repeat their efforts of last year they will need to tackle some of the headaches that need to be resolved.

The first issue is the possible signing of Rodrigo de Paul from Udinese.

The Argentinian midfielder is performing well at this summer's Copa America and is on the verge of becoming Atletico's first major signing ahead of next season.

The transfer seemed to be at an advanced stage, with reports in Italy claiming that a 35 million euro bid had been accepted, but Atletico have been far more coy on the topic.

De Paul's move to Atletico is still expected to go through, but the club's supporters will have to wait a little longer for it to be officially confirmed.

Rumours are still lurking regarding the possible exit of Kieran Trippier, who could return to the Premier League.

Atletico do not want to lose the England international, but if someone pays his 40 million euro release clause, Los Rojiblancos would not have any say on the matter.

Sime Vrsaljko is Atletico's back-up choice and maybe someone who could benefit from Trippier's exit.

The Croatian, who has played two out of Croatia's three games at Euro 2020, has insisted that he is happy in Madrid but that he wants to play more regularly.

A back-up for Oblak

Another question to be resolved is that of Jan Oblak's deputy, following the possible departure of Ivo Grbic.

Grbic is looking to play more regular football and, with his current situation at Atletico not satisfying his needs, the club could go into the transfer market to find a replacement for the Croatian shot-stopper.

It would not be an easy task to find a goalkeeper who meets all of the requirements to play behind Oblak, but there are several names that have been linked to Los Colchoneros in recent weeks.

The departure of Diego Costa in December and the expiration of Moussa Dembele's loan move leaves Atletico with just one out-and-out striker in Luis Suarez.

If they are to compete at the same level as last season they will need some form of back-up for Suarez, but given the club's current economic situation, it seems that Atletico will need to sell before they can buy.

There has been a lot of talk about the possible departure of Saul Niguez, but there have not yet been any offers for the midfielder. It is thought that De Paul will act as Saul's replacement.