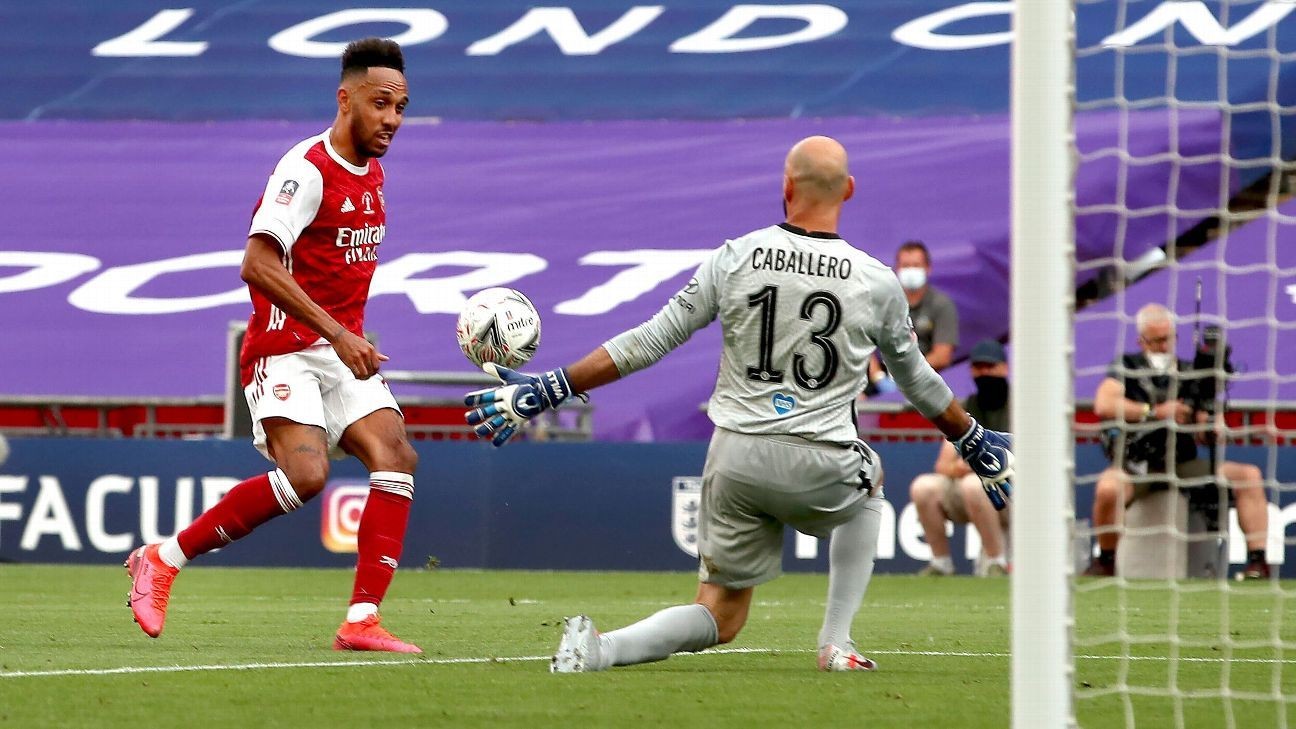 Arsenal will have seen this FA Cup final as a chance to end a difficult season on a high. It didn't start how they would have liked though, as Christian Pulisic put Chelsea ahead just five minutes in.

- Catch FA Cup, Serie A, MLS and more on ESPN+ (U.S. only)
- Who qualifies for Europe from the Premier League?

However, Pierre-Emerick Aubameyang got the Gunners back on level terms, when he won and converted a penalty. The Gabonese talisman then added to that in the second half to put Mikel Arteta's team in the lead with a delightful finish and secure the 2-1 win.

Both teams had chances following Arsenal's second, but the Gunners put in a solid performance to ensure that Arteta finished his first season with a major trophy. Along with a record-extending 14th FA Cup lift, it also means there will be Europa League football at Emirates Stadium next term.

The Gunners posed a real threat when getting in behind the Chelsea defence, as was shown most obviously when Cesar Azpilicueta fouled Aubameyang to give away a penalty. They recovered well from their early setback and turned the game's flow around in the first half after the drinks break. They put in a strong defensive performance in the second half, keeping the men in blue at bay and seeing the game out convincingly.

They had a poor start defensively, and it was far too easy for Pulisic to get time in the box to score the game's opener. The midfield also struggled to get a foothold on the game in the early stages, though that is something that improved as time went on. However, these were both addressed as the game went on.

9 -- Arteta's biggest decision ahead of this final is arguably starting Ainsley Maitland-Niles, and the 22-year-old's performance vindicated that. It can't be doubted that he has brought organisation and a clear way of playing to this Arsenal team, both of which were on show in this game. He was given a yellow card after an incident with Antonio Rudiger.

GK Emiliano Martinez, 8 -- Made some good saves and dominated his box well. He had no chance of saving Pulisic's effort for the game's opener.

How the Premier League could have eight teams in Europe next seasonUSMNT ace Pulisic scores, injured in FA Cup final

DF Rob Holding, 7 -- The centre-back put in a resilient performance, often getting the better of whoever he came up against, even if they initially got past him. He did provide one or two shaky moments though.

DF David Luiz, 8 -- Some of his passing was a bit off, but it was a largely solid performance from the Brazilian, who did well in an intriguing battle with Olivier Giroud.

DF Kieran Tierney, 8 -- His balls in behind caused havoc for Chelsea's defence at points, while he was typically reliable in defence.

MF Hector Bellerin, 8 -- Worked tirelessly down the right and got the better of his compatriot Marcos Alonso in their head-to-head battle. It was his drive forward that started the move for Arsenal's second goal.

MF Dani Ceballos, 9 -- There were times when Ceballos struggled early on, but he never shied away from getting the ball and put in a superb overall performance.

MF Granit Xhaka, 7 -- Looked very slow on the ball in the early stages, but made a big improvement as time went on. Both of Mateo Kovacic's yellow cards were for tackles on the Switzerland international.

MF Ainsley Maitland-Niles, 7 -- Made some really dangerous runs down the left, though his end product was mixed. He showed good awareness defensively.

FW Nicolas Pepe, 8 -- Had what would have been a well-taken goal disallowed. Was dangerous throughout, and showed intelligence to set up Aubameyang for Arsenal's second.

FW Alexandre Lacazette, 7 -- Struggled to get in goalscoring positions, but the Frenchman provided some very good link up play for his teammates.

FW Pierre-Emerick Aubameyang, 9 -- Won a penalty by getting in behind Cesar Azpilicueta and put it away clinically. Then went and scored Arsenal's second with a delightful finish.

Edward Nketiah, N/A -- Replaced Lacazette in the 82nd minute and showed plenty of energy up top.

Sokratis Papastathopoulos, N/A -- Replaced Luiz in the 88th minute and helped Arsenal see out the game with some good defending.

Sead Kolasinac, N/A -- Replaced Tierney in the 103rd minute, moments before the final whistle was blown