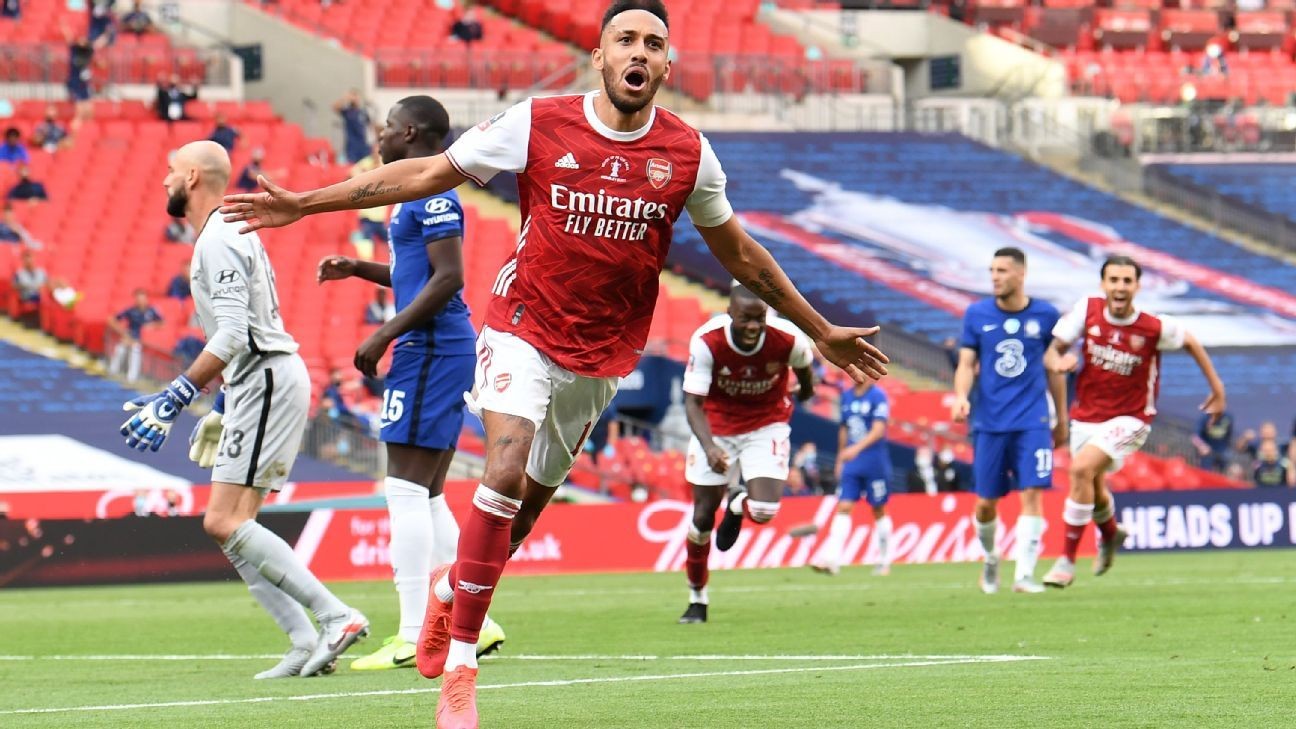 Pierre-Emerick Aubameyang scored twice to secure a 2-1 victory for Arsenal against Chelsea in the FA Cup final and with it a place in the Europa League on Saturday.

Saturday's FA Cup was the third time Arsenal and Chelsea have faced off in finals in as many years with Arsenal beating Chelsea in the 2017 FA Cup and the Blues coming out on top in the 2019 Europa League final.

It was Chelsea who started the brighter with Christian Pulisic becoming just the second United States international to score in an FA Cup final, following in the footsteps of Carli Lloyd who scored for Manchester City in 2017.

The U.S star opened Chelsea's account after just five minutes when Mason Mount sent a low ball into the box which was flicked into Pulisic's path by former Arsenal forward Olivier Giroud. A quick touch from Pulisic on the penalty spot was all it took to chip the ball over Emiliano Martinez's head.

Arsenal thought they had equalised on 25 minutes when Nicolas Pepe curled a stunning shot from outside the box into the top left corner past Willy Caballero.

However, the offside flag was up before Pepe's shot even hit the back of the net and replays showed that Ainsley Maitland Niles, who fed the pass to Pepe, had been caught ahead of the Chelsea defence.

The Gunners were gifted a goal just a minute later though when Cesar Azpilicueta brought Aubameyang down in the box and referee Anthony Taylor pointed to the penalty spot.

Arsenal coach Mikel Arteta said before the game that winning the FA Cup would be crucial to keeping Arsenal's talisman and it was Aubameyang who stepped up to put Arsenal level on 28 minutes.

Azpilicueta had a tough day on the pitch and the Chelsea captain limped off in tears after 34 minutes with a hamstring injury, replaced by Andreas Christensen.

Frank Lampard was forced into another change seconds into the restart when Pulisic went down also clutching his hamstring after Chelsea's first attack of the second half.

The first 20 minutes of the half were a slower affair with both sides failing to find any kind of spark.

Despite the momentum building in Chelsea's favour, Aubameyang broke the deadlock and added his second of the day on 67 minutes.

A quick pass in from Pepe saw Aubameyang take a touch before dinking the ball over Ceballos' head.

Luck wasn't on Chelsea's side and six minutes later Mateo Kovacic was sent off after a sliding tackle on Granit Xhaka saw him earn a second yellow card.

Chelsea were reduced to nine men in the final seconds of the game after Pedro went down clutching his shoulder in the box and had to receive oxygen before being stretchered off.

The win marks Arsenal's 25th year qualifying for Europe and means that Wolves will have to win the Europa League if they want to appear in the competition next season.