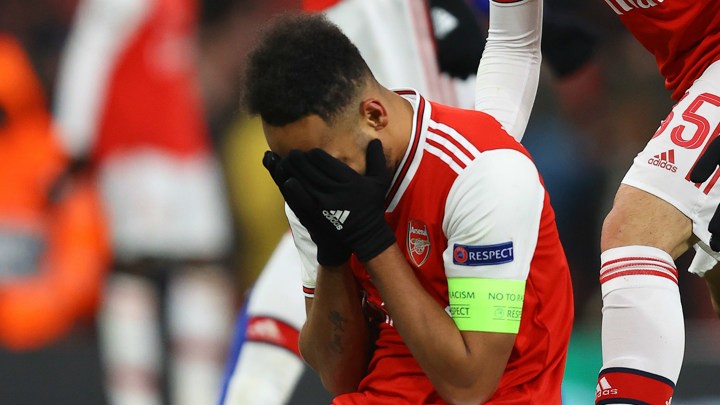 Pierre-Emerick Aubameyang may be “the nearest thing” to Thierry Henry that Arsenal have had, but Martin Keown fears a prolific frontman will not commit to a new contract and needs to be stripped of the captain’s armband as a result.

A Gabonese talisman at Emirates Stadium continues to see his future dominate headlines in north London.

As things stand, the 30-year-old striker is yet to extend his stay with the Gunners beyond the summer of 2021.

Arsenal cannot afford to let another prized asset amble towards free agency, having seen plenty do that in the past, and have a big decision to make when the next transfer window opens.

Keown concedes as much, with it looking increasingly unlikely that Aubameyang – who has netted 61 times in 97 appearances for the club – will be putting pen to paper on fresh terms.

“I don’t think he will. I think he’ll leave with a heavy heart,” former Gunners defender Keown told talkSPORT of a player who has been heavily linked with Manchester United and Real Madrid.

“I think he’s the nearest thing I have seen to Thierry Henry at the football club and the club will have to make swift decisions. They can’t allow what happened a few years ago with the transfers just going on and on. The club needs direction.”

Arsenal have seen their inability to agree contract extensions with prized assets become an all too familiar theme over recent years.

Aubameyang is offering them another headache at present, with Keown of the opinion that a player not fully committed to the long-term cause cannot be allowed to skipper the club heading forward.

He added, with Premier League action set to resume amid the coronavirus pandemic on June 17: “It's a real concern for Arsenal, recently with [Mesut] Ozil, they lost [Aaron] Ramsey, they lost [Alexis] Sanchez.

“We're hearing now that, unlike [Unai] Emery who wasn't involved apparently in the Ramsey situation, him leaving, he's [Arteta] getting involved.

“I think the message needs to be to the player 'look, we can't have you captaining the club if there's uncertainty around your contract', in the last year of his contract, that can't be allowed to happen.

“Whether you keep him, whether you don't, that all depends on the monetary side.

“What are they going to get? What are the offers? Because they do need to look at it and what it means to them to break into the Champions League, to maybe challenge for a Premier League.

“So if they're only going to get an offer of £20m-£30m then you have to consider whether you're going to keep him there or not and whether the player has got the mental capacity to stay, but he can't be captain because the message is the wrong one to the rest of the group.

“So there's lots of building for Arteta to do.”