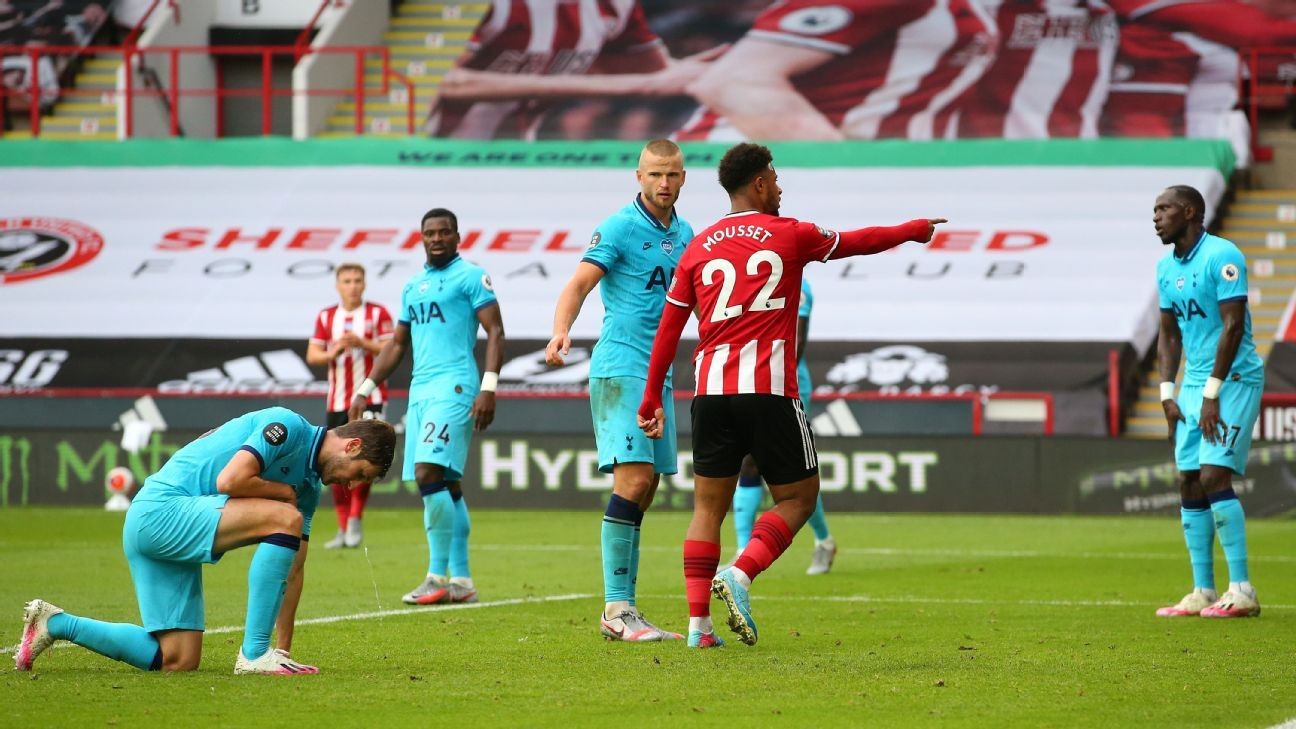 Tottenham Hotspur's European hopes are hanging by a thread after a crushing 3-1 Premier League defeat to Sheffield United on Thursday night.

Sander Berge put the Blades ahead just after the half-hour mark before Harry Kane saw his leveller controversially ruled out by VAR due to a Lucas Moura handball. Chris Wilder's men put their foot down in the second half and made it 3-0 courtesy of Lys Mousset and Oliver McBurnie, and while Kane did get on the scoresheet, it was too little, too late.

- What did you miss? The latest from Europe's top leagues
- Soccer is back! Stream ESPN FC Daily on ESPN+ (U.S. only)t

The boys from North London looked solid in the air and responded well after going behind, with the disallowed goal being a harsh decision that really changed the flow of the game. Whenever they found openings through the middle, the visitors exploited them and caused a lot of problems for Sheffield United at the back. If they had more confidence up top, or if their structure allowed for more freedom, they could've caused some damage.

There was a real lack of inspiration on display from Spurs, and even when they went behind, fans could be forgiven for thinking that they were the ones trying to protect a lead. There were loose balls to be found across the Bramall Lane pitch, Spurs' over-reliance on slowing down the tempo causing them more harm than good. Finally, their determination in half-heartedly pressing down the right did nothing but cause further disappointment.

5 -- Questions will be asked of Jose Mourinho not only because Tanguy Ndombele didn't start but also because he opted for a formation that seemed to restrict what Spurs were able to do moving forward. The likes of Giovani Lo Celso and Son Heung-min looked lost under his direction, and while he made some necessary changes, they came quite late given the pressure they were under from the hosts.

GK Hugo Lloris, 6 -- There wasn't much the Frenchman could do for the first two goals, and yet while he did show leadership in the box and command off his line, he could've done better on McBurnie's strike.

DF Ben Davies, 4 -- It was a really poor day at the office for the full-back as he showed hesitancy when closing his man down, didn't track the overlapping run for the first goal and showcased bad decision-making on and off the ball.

DF Eric Dier, 5 -- The England international's calm and composed display fell apart in the second half after he failed to pick up the onrushing Mousset for the Blades' second.

DF Davinson Sanchez, 5 -- There's always a mistake or two lingering in Sanchez's locker, as he proved when being drawn out of position at 2-0 before failing to get goalside of McBurnie.

DF Serge Aurier, 4 -- Drifting out of position is one thing, but the fact that Aurier simply cannot string a series of positive crosses into the box is incredibly worrying for Spurs fans. Worse yet, for the second goal, he simply switched off.

MF Giovani Lo Celso, 5 -- The Argentine is wasted in the middle of the park with his creative spark sorely lacking this evening. From pillar to the post, there was a real apathy to his game that was blindingly obvious.

MF Moussa Sissoko, 5 -- Great bursts into the opposition's half can only get you so far, as Sissoko's lack of composure and poor decision-making continues to stunt his development.

Tottenham's defence was in shambles in a 3-1 defeat to Sheffield United on Thursday. Photo by Alex Livesey - Danehouse/Getty Images

MF Steven Bergwijn, 6 -- He may have looked exciting at points in the No. 10 role, but as the second half wore on, he was trying to do too much and simply couldn't carry the team on his back.

MF Lucas Moura, 5 -- Running straight into defenders for the better part of 90 minutes was, once again, a strategy that didn't pay off. With that being said, he was one of the only starters that showed some urgency.

FW Son Heung-min, 6 -- The popular forward went missing on the left but did manage to do something of note with a nice run and assist for Kane's consolation.

FW Harry Kane, 7 -- He was unlucky to see his equaliser chalked off in the first half, but he did manage to add to his tally for the season with a tidy finish late in the day.

DF Jan Vertonghen, N/R -- The only major contribution he made was a dose of poor communication for Sheffield United's third.

MF Tanguy Ndombele, N/R -- Didn't have enough time to make a substantial impact with many left to question why he didn't start.

MF Erik Lamela, 6 -- Aside from a well-timed cross for Tottenham's only goal of the game, Lamela couldn't dig deep enough to be the driving force behind a Spurs resurgence.

MF Dele Alli, N/R -- The "superstar" went missing after being brought on and couldn't inspire a comeback.