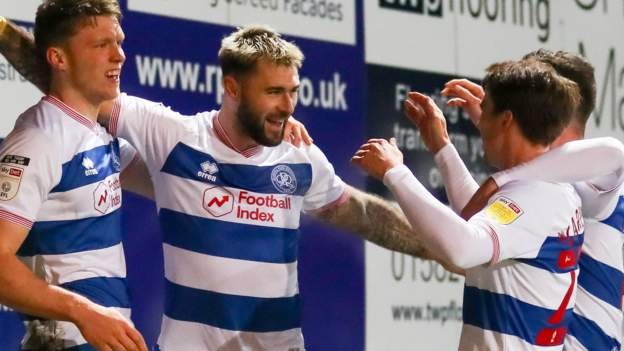 Charlie Austin scored on his first appearance since rejoining QPR as they beat Luton for their first win in 10 Championship games.

The striker re-signed on loan from West Brom on Saturday and was in the right place to nod in at the back post after team-mate Geoff Cameron had flicked on a corner.

Luton were unbeaten in six league matches at Kenilworth Road and should have responded after the break, James Collins slicing wide when through on goal and Pelly-Ruddock Mpanzu clipping the woodwork with a curling effort from just outside the box.

Centre-back Rob Dickie headed over as the R's continued to carry a threat before substitute Macauley Bonne slotted home a second from an inch-perfect Albert Adomah pass.

Victory moves Mark Warburton's side up to 18th, five points clear of the relegation zone and to within six points of the 14th-placed Hatters.

Former Burnley man Austin, 31, scored 45 goals in 82 league games in his first spell at QPR to earn a move to Southampton but had been restricted to five appearances off the bench for West Brom in the Premier League this season.

He led the line well until being taken off on 59 minutes, poaching his goal and combining well with strike partner Lyndon Dykes.

Luton were off-colour - managing just two shots on target - although Hatters boss Nathan Jones opted not to make any changes until the 77th minute.

On-loan Leicester midfielder Kiernan Dewsbury-Hall skewed a decent chance off-target and forced a decent low save from Semy Dieng but Luton have now won just one of their past 19 league games against QPR.

Attempt missed. George Moncur (Luton Town) left footed shot from a difficult angle on the left is just a bit too high. Assisted by Luke Berry with a headed pass following a corner.

Macauley Bonne (Queens Park Rangers) wins a free kick in the defensive half.

Tom Lockyer (Luton Town) wins a free kick in the defensive half.

Robert Dickie (Queens Park Rangers) wins a free kick in the attacking half.