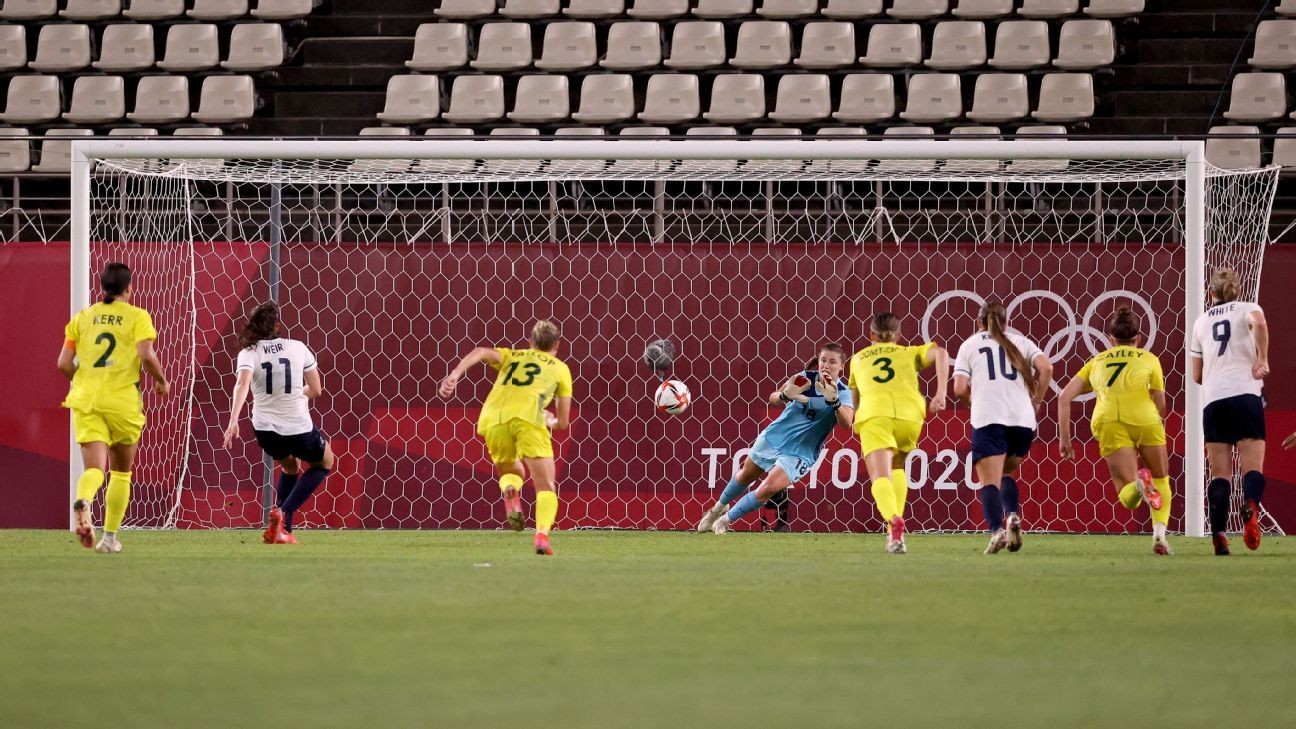 Australia reached the semifinals of the Olympic women's football tournament at the 2020 Tokyo Games with a dramatic 4-3 extra-time win over Great Britain in Kashima.

Alanna Kennedy gave the Matildas the lead in the first half but Ellen White's second-half double put Team GB ahead, only for Sam Kerr's late equaliser to send the match to extra time.

After Team GB's Caroline Weir had a penalty saved, substitute Mary Fowler and Kerr scored either side of the break before White sealed her hat trick in her side's late fightback, but it counted for nothing.

This is Australia's most successful Olympics ever, and not just because of their win

In the lead-up to the Tokyo Olympics, Matildas head coach Tony Gustavsson was often asked about the various challenges the Matildas have had to overcome to get here. Never one to make excuses, he always responded. He does not want to give too much weight to things beyond his -- and the team's -- control.

As Australia make history by qualifying for the semifinal of the Olympics for the first time, it is worth reminding ourselves exactly what this team has gone through over the past 18 months in order to reach this point.

First, and most obviously, the pandemic. Of all the teams to make it to the quarterfinals, Australia were the side that had the longest time between national-team fixtures during the shutdown: 395 days. In that time, many of the players now included in the Tokyo squad had varying levels of game time, from the league and cup competitions of Sam Kerr & Co. who ply their trade in England to the cobbled-together seasons of the likes of Emily Gielnik, Teagan Micah and Clare Polkinghorne who shuffled between the W-League and Europe, to the injury ravaged campaigns of Steph Catley and Chloe Logarzo.

By contrast, the Great Britain team -- almost all of whom are English -- have had an easier run to Tokyo. While the team itself hadn't gathered together for roughly the same time as Australia (349 days), the vast majority of them had been developing the relationships and chemistry needed on the field. Indeed, against Australia, Great Britain lined up with eight players who all started regularly for Manchester City in the FA Women's Super League, in addition other who know each other from Chelsea and Arsenal.

Secondly, the Matildas underwent a coaching overhaul. Gustavsson was hired in January, but wasn't able to meet any of his players in person until April. Developing team chemistry is one thing, but trying to lay down new football systems and philosophies via zoom is quite another. We saw the impact of that in Australia's early friendlies: conceding 10 goals in two games as they tried to learn and unlearn years of footballing lessons in the course of a few weeks.

Finally, particularly against the sides they have met in this tournament, Australia have seemed -- on paper, at least -- outmatched. The dazzling array of talent in the squads of Sweden, the United States and Great Britain has made Australia the underdogs in most of their games. And yet they have found ways to move through them -- perhaps not with the results of world-beaters, but with the nous and management of a team capable of stepping up when it counts. That was truest against Great Britain; a team against which the Matildas were not expected to match, let alone defeat. But after 120 gruelling, tense, ecstatic minutes, it's the team that have continued to grow into the tournament -- and into themselves -- that have come out victorious.

Not only have the Matildas now created history, reaching the Olympic semifinals for the first time and within touching distance of their first medal, but they have done it despite everything that has been thrown their way. Regardless of how much further they go from here, this has been the most successful Matildas tournament ever and a testament to a side who continue to embody the "Never Say Die" motto emblazoned on their green-and-gold jerseys.

Every football game is a series of sliding-doors moments; points at which every match can spin off in multiple directions and realities, the kind you look back on and wonder: "What if?" Australia's first-ever match against Great Britain had a number of major moments like this, but some of the most crucial happened in the opening half-hour when both sides were still settling, still trying to figure each other out.

Step up, goalkeeper Teagan Micah. As part of the Gustavsson revolution, it has arguably been the 23-year old who has benefited most from the opportunities the clean slate has presented. Two years ago, having returned to the W-League from three years in the U.S. college system, Micah was keeping Melbourne Victory's bench warm behind an in-form Casey Dumont. She was the third-choice goalkeeper at the 2019 Women's World Cup, too, but never saw a minute -- preference instead given to Australia's trusted veteran Lydia Williams.

But Tokyo has been different. After a classy showing against Sweden in their 0-0 friendly draw, Micah was handed her first competitive start against the same side in the group stage. Despite conceding four goals, she was handed another start against reigning world champions the USWNT, against whom she kept another clean sheet.

The talent and natural shot-stopping abilities that Gustavsson rewarded was on further display in Australia's game against Great Britain. She made a fingertip diving stop of a Rachel Daly strike in the 11th minute (which was ultimately called back for offside), as well as a crucial low block of a Lauren Hemp volley midway through the half. While the match ebbed and flowed in terms of dominance and possession, Micah was able to step up and make major saves when her side were under pressure, keeping Australia in the contest for the entire first half until Alanna Kennedy's header in the 34th minute but the Matildas ahead.

None mattered more, though, than Micah's save of a potential game-winning penalty from Weir. The clinical Manchester City and Scotland midfielder, whose strike against Canada helped GB finish top of their group to play Australia in the quarterfinal, stepped up to the spot but Micah made a confident diving save to keep the score at 2-2 before young substitute Fowler and a second Kerr header sealed the win.

This was, undoubtedly, Micah's moment. Beyond making necessary, high-pressure stops, she had one of her most holistic performances in her national team career to date, reacting to intense moments, nailing the basics, providing passing outlets and making mature decisions on the ball. With Australia's original No. 2 Mackenzie Arnold already fallen down the pecking order, Micah has worked her way up to becoming a genuine replacement for the once-irreplaceable Williams. The best part? The youngster can only get better.

When Matildas captain Kerr was in the midst of her goal drought in the pre-Tokyo friendlies, Gustavsson was always adamant that Australia's best goal-scorer in a generation had more value to the team that the number of times she hit the back of the net. The consequence of Kerr becoming one of the most dangerous and most visible players in the game has meant she has had a massive target on her back. Against most teams in Tokyo, Kerr has been largely marked out of them: forced to find other ways of contributing to the team due to being almost constantly surrounded by defenders.

One of Gustavsson's constant praises of Kerr has been along those lines: not about her clinical ability in front of goal, but of her defensive contributions to the team and the way she is able to bring players in and around her. Against Great Britain, Kerr showed exactly why Gustavsson has such faith in his skipper. She was, predictably, kept mostly quiet throughout the match by the rotating centre-back pairing of GB captain Steph Houghton and Leah Williamson, as well as substitute Millie Bright. And yet Kerr still found ways to be influential and dangerous: dropping deep to hold and pass the ball off to teammates, tracking back to make key tackles and challenges, and, as the clock wound down, digging deep to use her aerial ability to defend repeated corners and free kicks as GB looked certain to capitalise on their dominance and take the lead.

More than that, though, Kerr was able to find another level to her own game, too: in addition to doing the "leading from the front" defensive work Gustavsson so regularly comments upon, Kerr also scored two crucial goals -- her second brace of the tournament, taking her to five goals overall and Australia's all-time leading scorer at the Olympics -- including a header in extra time to give the Matildas their final, historic 4-3 win.

There can be no doubt, after this performance, that Kerr is the most fitting captain for this Australian side: a player who embodies the spirit, the determination, the hard work, and the selflessness that this Matildas team -- and the very idea of the Matildas itself -- has come to encapsulate for fans around the world.