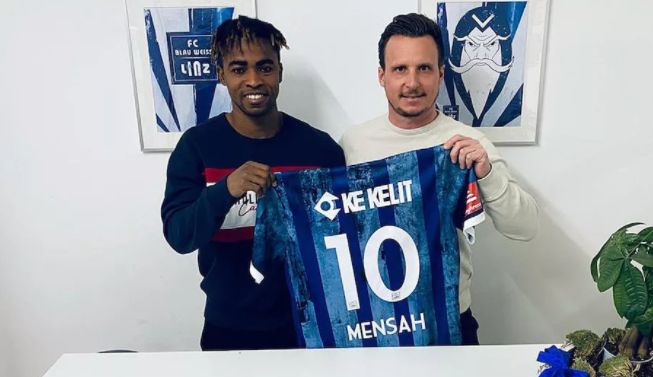 The 22-year-old signed a one-year deal which will see him stay at the club until 2023.

Having spent most of his career in Austria with Kapfenberg, the young forward move to Romania last season to join Bastoni but returned to Austria after making only two appearances for Botosani.

"I'm very happy to be here. I've been following the club closely since leaving Kapfenberg and despite other requests I was dying to come here. And I will work hard to help the club achieve their goals," said the Ghanaian attacker.

BW Linz sports Director Tino Wawra revealed the club has been chasing the forward for some time now and are delighted to finally secure his services.

"I wanted to get Paul from Kapfenberg a year ago, he was one of the most interesting players in league 2. I didn't have a chance back then because he also had offers from the Bundesliga. Unfortunately, he opted for an adventure abroad decided and was never happy. Now he's back on my radar and I'm happy he chose us. He brings extreme speed and is physically strong. A really unpleasant player for any opponent," said Tino Wawra.

Manager Gerald Scheiblehner extoled the qualities of Paul Mensah, which makes him a great addition to his team.

"His speed, his 1-on-1 skills and his goal threat will help us as a team. A big advantage is that he already knows the league well, speaks German and knows what to expect," said BW Linz manager.