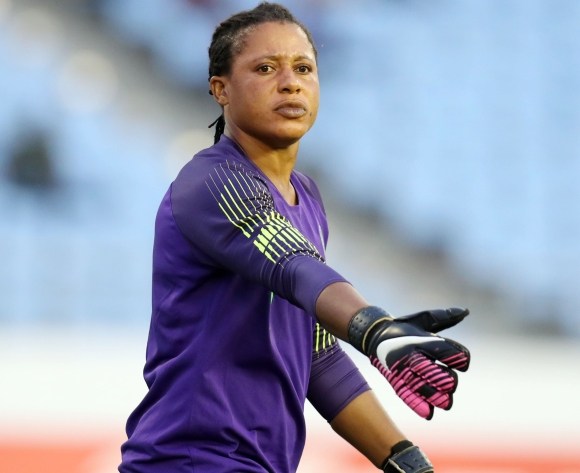 Oluehi Tochukwu of Nigeria during the 2018 TOTAL African Womens Cup of Nations match between Equatorial Guinea and Nigeria at the Cape Coast Sports Stadium, Cape Coast on 24 November 2018 ©Muzi Ntombela/BackpagePix

Nigeria Super Falcons goalkeeper Tochukwu Oluehi has reiterated her team’s desire to avenge their opening day defeat to South Africa when the two sides meet in the final of the 2018 Africa Women’s Cup of Nations.

The Super Falcons and Banyana Banyana will battle for the continental glory at the Accra Sports Stadium on Saturday, after they overcame Cameroon and Mali in the semifinals respectively.

South Africa will go into the game with bags full confidence following their 1-0 victory over the Falcons in the opening fixture of Group B.

However, Falcons goalkeeper Oluehi says they will tackle the match with the mindset of avenging that painful defeat.

“Meeting South Africa in the final is what we have been praying for because we want to play them again,” said Oluehi.

“We want to tell them that winning [against] us in the group stage was a mistake and it’s not going to happen again. I’m sure we will beat them in the final.”

Nigeria are chasing a record-extending 11th title, while SA are hoping for their first, having been runners-up no less than four times.

The final is scheduled to kick-off on Saturday at the Accra Sports Stadium.