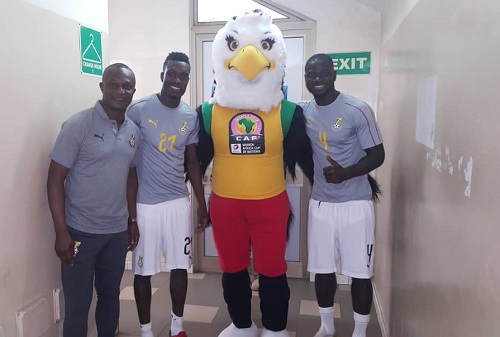 The Official Mascot for the 2018 Africa Women Cup of Nations (AWCON) has thrilled thousands of football fans with a massive roadshow ahead of Africa’s biggest women tournament.

The eagle mascot christened: ‘Agrohemaa,’ which literally translates as “Game Queen, ‘travelled from the city of Accra through Cape Coast, Takoradi to Kumasi to help whip up excitement in the build-up to the start of the tournament.

Speaking on the mascot road show, Chairperson for the Local Organising Committee, Madam Freda Prempeh, said the move by the LOC to initiate a mascot road show was to help create awareness on the tournament in Ghana.

“This is the first time Ghana is hosting the Women African Cup of Nation and it is very imperative to help Ghanaians and football lovers familiarise themselves with the tournament before it starts. We believe putting the mascot out there will help people to get to know about the tournament,” she said.

She explained that the mascot, which looks like a female eagle, symbolises courage, strength, focus, and immortality.

Madam Prempeh was upbeat that the roadshow will help fans throng to the stadia in their numbers during the tournament to support their respective teams.

“The reception for the mascot during the roadshow was encouraging, therefore, we are overly optimistic about organising a successful tournament in Ghana,” she stated.

The 11th Africa Women’s Cup of Nations will run from 17 November-1 December, 2018 in Accra and Cape Coast. The tournament will also serve as a qualifier for the 2019 FIFA Women’s World Cup finals in France.