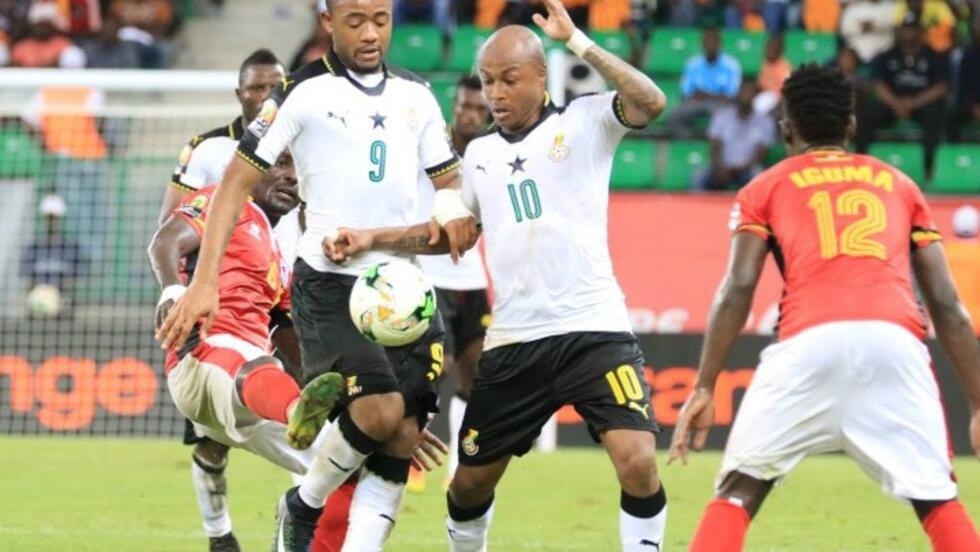 " /> Pierre René-Worms, FMM | The Ayew brothers in action during the Black Stars' narrow win over Uganda.

Andre Ayew converted a first-half penalty as Ghana started their latest bid to reclaim the Africa Cup of Nations title with a hard-earned 1-0 victory against Uganda on Tuesday.

The West Ham United star's 32nd-minute spot-kick was all that separated the sides on an awful pitch in Port-Gentil as Ghana withstood Ugandan pressure in the second half and ended their recent poor record against the Cranes.

The Black Stars, who have not won the continental title since 1982 and lost on penalties to the Ivory Coast in the final two years ago, can now look forward with confidence to their next game against Mali.

"In the first half we dominated the game but in the second half we knew the result was the most important thing and we played to win," said Ghana coach Avram Grant.

"We missed two or three good opportunities but at the end of the day I am happy and I think we will keep improving."

Still no goal for Uganda at Cup

Uganda will have to wait a little longer for their first goal and points in their first appearance at the Cup of Nations since 1978.

"In 39 years we have not been there and in the first half we had an element of stage fright," admitted Cranes coach Milutin Sredojevic.

Eight of Ghana's line-up started the final in Equatorial Guinea in 2015, the only exceptions being Thomas Partey, Jordan Ayew and Leicester City's Daniel Amartey.

Ghana had struggled in recent matches against Sredojevic's side, failing to win any of three encounters spread over the qualifiers for the 2015 Cup of Nations and the 2018 World Cup.

However, Uganda were without key players in centre-back Murushid Juuko and midfielder Khalid Aucho through suspension, and they spent most of the first half on the back foot.

Twice skipper Asamoah Gyan headed just wide and Christian Atsu fired narrowly over before Andre Ayew steered a low shot towards goal only for Denis Onyango to save.

After knocking on the door in the first half hour, the breakthrough came when Gyan robbed Isaac Isinde inside the area before being held back.

The referee from Botswana pointed to the spot and booked the defender, with Ayew waiting for Onyango to commit before slotting in the penalty.

Atsu, the star of the 2015 tournament, tested Onyango soon after but by that point Ghana had lost left-back Abdul Rahman Baba, stretchered off with what looked like a hamstring injury.

Spurred on by a small but lively band of supporters decked in red, yellow and black, Uganda finished the first half with a flourish and Faruku Miya of Standard Liege should have done better than send in a shot that grazed the post on its way past.

Tonny Mawejje came close and captain Geofrey Massa tried his luck from a 30-yard free-kick that flew inches over Razak Brimah's bar, as Ghana held on.

Indeed, they might have won by more had Atsu not been denied by Onyango five minutes from the end.

The win means Ghana top Group D, above Mali and Egypt, who settled for a goalless draw in Tuesday's other game.