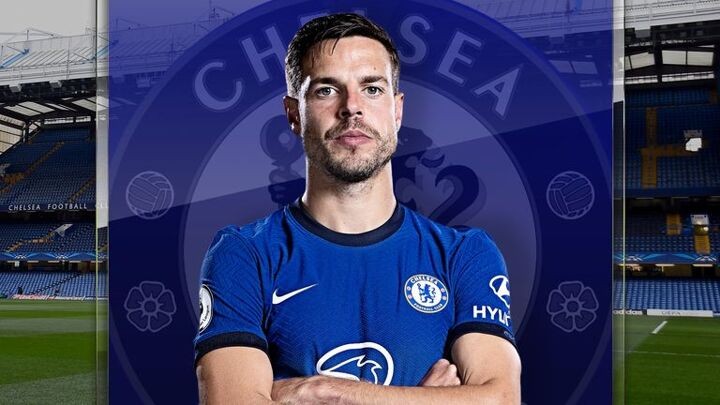 A couple of days on from Chelsea's much-needed win at Fulham, Cesar Azpilicueta is able to laugh about the evasive action he took to escape the full force of Antonee Robinson's red-card challenge.

"It was quite fast and I had to get out of the way as quickly as possible," he tells Sky Sports with a chuckle.

The image of the Chelsea captain cartwheeling through the air and his team-mate Hakim Ziyech appealing for a foul before Azpilicueta had even hit the floor was widely shared on social media.

But as well as his acrobatic escape from serious injury, Azpilicueta is hopeful the game will also come to be remembered as the match where Chelsea turned it around.

After just one win in their previous six Premier League games, Chelsea desperately needed three points at Craven Cottage - and the bruising, hard-fought, and important victory has shifted the mood at the club, ahead of Tuesday night's tough trip to Leicester City.

"We are Chelsea, we are very demanding of ourselves and we want to be always as high as possible fighting for everything," Azpilicueta says. "So when the results are not there we want to improve.

"Hopefully this win against Fulham can give us more confidence and grow into that game because against Leicester it's a game where we have to be at our best, we have to show confidence, we have to believe in ourselves and hopefully we can do a good game and get the win."

With Chelsea sitting seventh, six points behind third-placed Leicester, it feels like another defining moment for what Frank Lampard's side can achieve this season.

It has been a chastening fall since they hit the top of the table after beating Leeds in front of 2,000 of their fans at Stamford Bridge in early December, and no doubt a harsh learning experience for Chelsea's young squad.

Speaking with Lampard in the summer about what it takes to forge a winning mentality in a group of players, he pointed out suffering setbacks and recovering from them was all part of the process. But that doesn't mean it's straightforward.

The manager turned to some wise old heads to get Chelsea over the line at Fulham, with Jorginho, Antonio Rudiger, and Olivier Giroud recalled, but, as club captain, Azpilicueta says his approach to guiding his less experienced team-mates through this rough patch has been all about reinforcing the values of hard work and self-evaluation.

"In my role I try to help everybody and the young players, not many have the experience of having bad moments, tough moments," he said.

"We know through the career of a footballer you don't have every time a smooth path where you go and everything is easy and you win games and you play brilliant. Sometimes you have to go through difficult times and those moments make you stronger and better for the future

"You have to respond in a positive way, always being humble, looking at ourselves individually and collectively, knowing that playing for Chelsea is always fighting for everything and giving everything in every second on the training pitch, in the game, on and off the pitch.

"And also it's a mental aspect, to be ready. We know how it works when you're a bit down, the difficulties come from everywhere and you have to be tough and be ready to overcome this moment.

"Hopefully from there, with our experience - and we have a couple of experienced players in the group - we can try to help and get out of the difficult moment as quick as possible and stronger as individuals and as a group."

Consistency key if Chelsea are to challenge

Azpilicueta - now 31 and a two-time Premier League winner - speaks with the assurance of a player who has ridden out these tough times before. He also knows what it will take for Chelsea to recover their position among the top teams in the table: consistency.

"We know at the beginning of December we were top of the league, everybody could think we were there to win the title, and in a month we didn't have good results, we were in mid-table and everybody was saying we were out of everything, so we know how it works," he said, when asked if Chelsea's poor form had affected their objectives this season.

"But especially this season - where we see results nobody expects, and everybody is very close at the top of the table - we know that if we get the consistency back that we had in November and the beginning of December, when we were playing well and getting results at home and away, that's the way we want to carry on.

"We know that to be at the top of the Premier League is tough and you have to give everything in every single game - as we saw against Fulham, against 10 men for 45 minutes, it's never easy to win a game. They drew against Liverpool, they drew against Tottenham.

"Every game is very difficult and our focus has to remain on the next game, and, as a group, to keep improving, look at what we can do better, because that progression will allow us to get as high as possible."

Fine margins in the big games

In-form Leicester will be a significant step up on Fulham, though - and Chelsea will have to play better than they did on Saturday if they are to take points from Brendan Rodgers' side, who, for the second season running, are threatening to disrupt the established top teams.

"With the ball we have to be brave, confident, and to create chances, to put our attacking players in a dangerous position where they can create the difference," said Azpilicueta of their challenge at the King Power Stadium.

"Defensively, be solid - that's very important when you're playing against the kind of strikers, wingers they have, their creative players can create chances at any moment."

Chelsea are yet to beat a top-eight team in the Premier League this season, drawing three and losing three of those fixtures. But Azpilicueta says the margins are fine in these high-quality games - and Chelsea must make sure the key moments go their way this week.

"Every detail counts even more [against the top teams]: to be ready for every ball, to not make a single mistake, and, when we get a chance, to be clinical and ruthless in front of the goal," he said.

"Little things - a set play, a mistake - can decide a game and this is where we have to be clever and to take it for us.

"If we want to go to the top we need to win big games as well, so let's see.

"Building from the win against Fulham, we have a really short time to prepare for the Leicester game but we have to be ready, especially mentally, for the challenge."

After suffering and putting their bodies on the line to try to turn the tide against Fulham, Chelsea now need to back it up at Leicester.