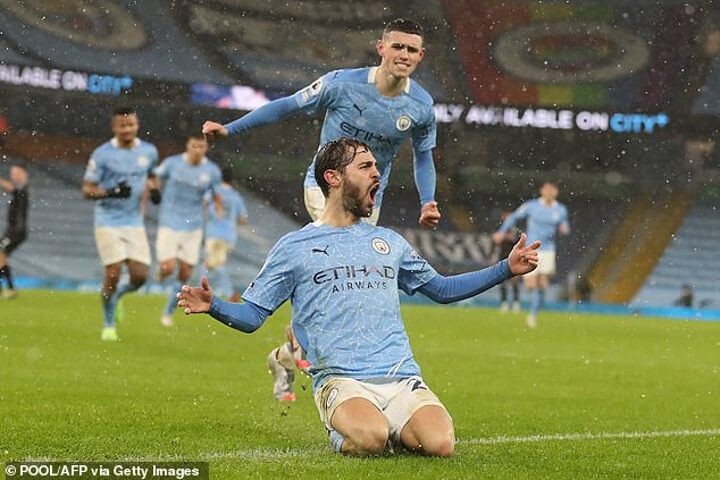 Bernardo Silva feels confidence is now flowing through Manchester City as their momentum continues to gather.

City underlined their growing title credentials as they claimed a sixth successive Premier League win with a hard-fought - and controversial - 2-0 success over Aston Villa at the Etihad Stadium on Wednesday.

The result briefly took them to the top of the table - before Manchester United returned to the summit with victory later in the evening at Fulham - and Silva is hungry for the run to carry on.

'I think the team is doing very well, especially lately,' said the Portuguese star, who broke the deadlock on a rain-soaked night with a contentious 79th-minute strike.

'The team is very solid at the moment, not just the defenders but the midfielders and the strikers.

'We are doing a very good job and the atmosphere in the dressing room, around the place, around the staff, is very good at the moment. We have to keep it up at this level.

'There are tough games ahead but we are going to try to keep doing our job.'

Silva's goal was the main talking point of the evening and led to Villa manager Dean Smith being sent off.

It came after Rodri ran back from an offside position to tackle Tyrone Mings. The Spaniard won the ball and played in Silva, who slammed a ferocious shot into the top corner from the edge of the box.

Villa protested, believing Rodri to have been offside, but referee Jon Moss ruled he was entitled to challenge for possession once Mings had controlled the ball. Smith was shown yellow and red cards in quick succession in the arguments that followed.

Subsequent analysis suggests Moss interpreted the laws correctly but that did not prevent Villa from feeling aggrieved.

'None of us knew that was a rule,' said Villa defender Ezri Konsa. 'Now we are aware of that we won't do it in the future.

'It is difficult for Tyrone Mings. There is a man coming from offside so he thought he could take a touch and try to play but obviously, apparently, as soon as he takes a touch Rodri is onside.

'We all believed he was offside and were very frustrated with that decision.'

Silva did not wish to dwell on the decision and felt City deserved their victory - rubber-stamped by a last-minute Ilkay Gundogan penalty - after creating numerous chances throughout the game.

Silva said: 'What I think happened was that our player was offside but when the defender controls the ball he stops being offside.

'I don't know if this is the rule but that's what I thought in the moment. If there is VAR and if the referee decided it that way it is because everything was clear.

'It was (a relief) to score. It was a tough game for us, especially the first half. We played against a very good side, a side that this season has proved to be very tough.

'At the end we were happy to score two goals and get the three points.'

Until Silva's goal, Villa had acquitted themselves well on their first team's first outing since New Year's Day following a Covid-19 outbreak at the club.

Konsa said: 'Us as players know we put in a great shift against a top team. We knew coming back after three days training we were going to have to work hard. I thought we did that.'