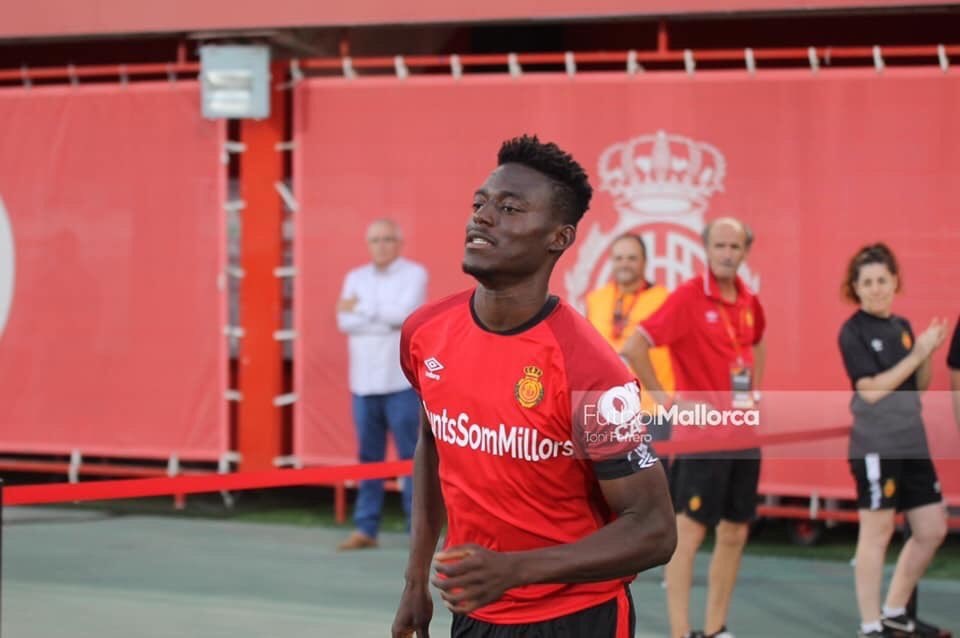 Ghanaian footballer Baba Iddrisu Mohammed is playing his best football at the moment for Spanish side Mallorca.

The 24-year was instrumental in the team’s promotion from the Segunda division to the La Liga Santander.

In an interview he speaks on a variety of issues, concerning his debut game, Target and many others

What do you think of these first weeks of the League? -Well well. It will not be easy but the first week went very well and we have to follow that line. And although we start well, I think we can do even better. You never know. We always have to be optimistic and positive.

advertising- Was the defeat against the Real Sociedad a very hard stick? —The team competed well and the game only escaped us at the end. Before his goal we had the opportunity of Lumor and if he had entered everything would have been different.

"Is this the great season of Baba?" "I hope so (laughs)." Every season there are good and bad things, but I pray to get the good ones and for everything to continue going as well as until now.

—In your case, it is good news in good news. "I'm happy with the bet that the club has made for me." Right now I just want to be here. Each player has plans for his career and I want to go step by step. I only think and work for Mallorca.

"Was there interest from other teams?" "It may be, but I was on vacation and just wanted to rest." I did not think about anything else. In addition, he had just climbed to Primera and imagined enjoying it too. But what I said, this is football and at any moment something different comes.

"Everything changes the day of the ascent." Was it the game of your life? "Until now, yes." It was like that, but I honestly believe that I can play many games like that if I work well and I'm focused. I can give more.

—When he saw the expulsion of Pedraza and sensed that he was going to play, did he really expect a night like that? —I was on the bench, but I felt very prepared, as always, because in any game something like what happened to Marc can happen and you have to be ready. I was especially focused on that last day and that's why I think it was too. And it was mostly thanks to my teammates and the master. They have always trusted me a lot and they always encourage me a lot. I was growing slowly and patiently. Soccer has many good things and other very bad things. Now the good ones are coming to me and I have to take advantage of it and enjoy it.

It was an excellent end to a difficult season at the individual level. It was difficult for him to enter the team, the expulsion of Extremadura Day ... "I learned a lot and I think I have gained experience in that regard. That's why I say patience. At first nothing is easy.

- Two years ago I played in Second B with Barakaldo, last year it was released in Second and now First ... - For me it was all like a dream. And a great opportunity for me, because there are many players who cannot have it in their entire career. I want to live it intensely and work hard.

"Did you feel anything special the day you debuted in First?" —I was a little nervous, but after the warm-up I felt much better and more calm and concentrated, which is what is needed for such a match. There are many technical and tactical differences, but I think that with time we can be there, although now it seems very complicated. Slowly.

—This year you can't ascend, but is there a template to try to make another good season? —Every season everything changes a lot and there are teams that you expect a lot of things and get down and backwards. There are always surprises. That is why we have to focus on ourselves, as we have done these years.

- What do you think of Vicente Moreno? "It has helped me a lot, on and off the field." When I play, it always calms me a lot and if not, it tells me to keep working and wait for my moment. He is one of the best coaches I know. The players trust him a lot and he trusts us a lot, that's why we're doing well.

"What about Marc Pedraza, who is he competing with for the position?" "It also helps me a lot." He has a lot of experience and always tells me what I have to do and what not to do, and that is good for young people. In the locker room we are like a family and I learn a lot from him and others. Before the game against Deportivo he told me to enjoy and not have more pressure. Competing is a challenge because it has everything. I try to learn from him in training and in matches because he has lived many more things than me and is a good partner to learn from.

- How far can Mallorca go? "I think we have no limit." And we like to give surprises. With work and tranquility we can continue doing beautiful things. We will try to save ourselves with all our strength and I think we will succeed.

—What do you dream of achieving with the Mallorca shirt? "For the moment, save us." I just think about that. Surely better things will come later, but do not hurry.