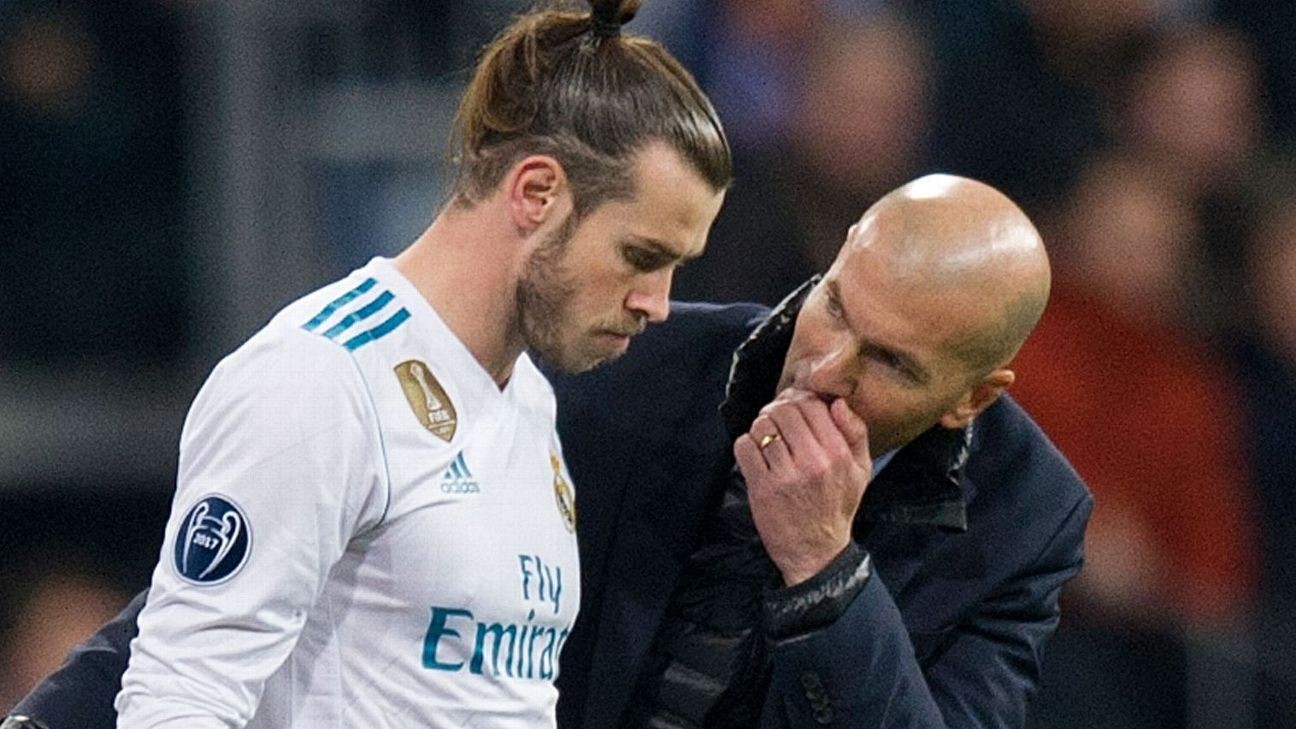 In this edition, it's turning really sour between Gareth Bale and Zinedine Zidane. Plus: Manchester City are looking to Burnley for a Leroy Sane replacement.

Bale's bitter battle with Zidane: 'It's something personal'

The relationship between Gareth Bale and Zinedine Zidane at Real Madrid is worse than ever and looks beyond repair, multiple sources familiar with the situation have told ESPN.

- What did you miss? The latest from Europe's top leagues
- Transfer Q&A: How will summer transfers work?

The bad feeling dates back to Real Madrid's 2018 Champions League final victory against Liverpool, when Zidane left Bale out, only to see the Welshman score a match-winning double off the bench.

Zidane left the club days later, only to return in March 2019, and the situation has steadily deteriorated since then, with sources telling ESPN it has "now become something personal" between the pair.

Bale is upset at frequently being named a substitute in key matches and Zidane and his staff, while having no complaints about his performance in training, have not been impressed with how the forward has reacted to those decisions.

The concerns led Bale to be benched against Manchester City in their Champions League round-of-16 first leg defeat in February, as well as in the 2-0 victory over Barcelona El Clasico that same week.

The frosty relationship, in addition to Bale's persistent injury problems, has effectively made him a €100 million substitute. Since La Liga returned, the Wales international has come off the bench against Eibar, been an unused sub against Valencia and Real Sociedad, and failed to impress in a rare start against relegation candidates Mallorca on Wednesday.

In public Zidane has tried to keep the peace, describing the situation as "completely normal" but in reality he has been uncomfortable discussing the matter ever since his infamous "if Bale leaves tomorrow, that would be best," admission last summer.

Bale's Real Madrid teammates find the situation hard to understand, recognising his ability and confirming he works hard in training. Higher up, though, sources have told ESPN Bale's relationship with president Florentino Perez, one of his principal defenders, is not what it was.

"Gareth is fine," Bale's agent Jonathan Barnett told ESPN, and while the player admitted last month that he would "definitely be interested" in playing in Major League Soccer in the future, a move anywhere this summer may prove difficult given the post-COVID-19 financial squeeze on the transfer market. -- Alex Kirkland and Rodrigo Faez

Guardiola confirmed last week that Sane will leave the Etihad this summer, or at the end of his contract in June 2021, after the Germany international made it clear that he will not sign a new deal at City. Bayern Munich is the player's most likely destination.

The City manager has played down the impact of Sane's impending departure by insisting the club already has enough players capable of filling the void, including Riyad Mahrez and Bernardo Silva. Both have impressed this season while Sane has been sidelined with a cruciate ligament injury.

But despite Guardiola's confidence in his squad, sources have told ESPN he has made no secret of his admiration for the 20-year-old McNeil, who has overcome the setback of being released by Manchester United as a 15-year-old to become a regular under Sean Dyche at Burnley.

Born in Rochdale, less than 10 miles from the Etihad Stadium, McNeil has developed quickly since making his Burnley debut on the final day of the 2017-18 season and Guardiola believes he has the potential to become a leading player and one who possesses the athleticism and versatility to thrive at City. -- Mark Ogden

play2:27Laurens: Not a chance Gareth Bale will replace Leroy Sané

Arsenal were keen to play down Kia Joorabchian's influence at the club during a week in which two of his clients signed new contracts but rival agents have already noted the closeness of the relationship with interest.

The Gunners have privately stressed that Joorabchian, one of the world's leading agents, has never counted the club's technical director Edu among his clients. There is also footballing logic to two deals with Joorbachian at their heart -- re-signing David Luiz and securing the permanent transfer of Cedric Soares from Southampton -- given how their professionalism behind the scenes has impressed head coach Mikel Arteta.

Arteta's public confirmation in wanting to keep both players plus the club's well-documented modest transfer budget heavily mitigates any conspiracy theories. But other agents have expressed their surprise at Joorabchian's voice appearing to be the loudest during the negotiation process, particularly in Luiz's case when he went on a UK radio station to declare the delay in extending the centre-back's contract related to "several issues within the whole structure" of the club.

It was his apparent comfort in speaking about Arsenal in such broad terms which raised eyebrows among several other agents, including two with players at the club. Perhaps a more publicly visible presence from the key decision-makers at the top of the club in future deals would help address this perception. -- James Olley

Sid Lowe breaks down why Barcelona's swap of Arthur for Juve's Miralem Pjanic is a sign of a club in decline.

Sassuolo's Jeremie Boga has emerged as a potential back up plan for Manchester United in their pursuit of Borussia Dortmund's Jadon Sancho, sources have told ESPN.

Sancho is still the priority for United but with Dortmund not budging on their €120m valuation of the England international, United have to think about alternatives.

We look back at past Premier League transfers with a simple question: Who was the best signing in the history of the competition?
• Full list: 100-51 | 50-1

Boga is one of them. The Frenchman, who impressed at youth level when he joined Chelsea, wants to play in major European competitions next season, ideally in the Champions League.

He is very interested by the project that United have approached him with. -- Julien Laurens

Fans in stadium for Barca vs. Atleti?

La Liga are pressing ahead with plans to bring fans back into stadiums this season, with a source telling ESPN supporters could even be allowed into Camp Nou for next week's clash between Barcelona and Atletico Madrid.

The league drew up a strict protocol and sent it to clubs this week detailing measures to be taken when grounds re-open. ESPN had access to the document, which includes five designated arrival slots, with those deemed most at-risk -- if they still want to attend games -- entering just before kickoff. Fans will leave after the game according to their row, with those closest to the exits let out first.

There will be temperature checks on arrival (if you fail the first one, you'll get a second chance) and everyone will have to wear masks and stay in their seats. They'll also be given specific toilets to use but all stadium retail will be closed.

Clubs will have the final say on who can attend games, with stadiums anticipated to open at a hugely reduced capacity at first, somewhere between 10 and 30%.

A La Liga spokesman says a date for the re-opening of grounds hinges on the green light from the government. However, another source says the protocol would not have been sent around if it wasn't close and even suggested Atletico's trip to Barca on June 30 could see fans return, along with the rest of La Liga matches schedule for game week 33. -- Sam Marsden and Moises Llorens

... as Barca look for cash for transfers

Barcelona season ticket holders have been invited to help fund the club's summer spending by giving up their right to a refund for games that are played behind closed doors.

The Spanish champions finally laid out three options for supporters this week to reclaim a percentage of the money they spent on their seats for the campaign.

The first option is a refund proportional to the number of games they will miss this season, which could be as many as five, not including the Champions League fixture against Napoli. The second option is the same amount discounted from the cost of next season's season ticket.

And the third option? Let the club keep the money. The club will appeal to the fans' good nature by explaining how hard they have been hit by the coronavirus pandemic and how they are struggling to hit their predicted revenue for the financial year. The third option is also the default option. So if you don't reply to the club, they will keep the money.

Money which then, presumably, will not only help balance their books but also go on any potential summer signings, with Inter Milan striker Lautaro Martinez still a target as they also look to finalise an exchange deal with Juventus that would see Arthur Melo and Miralem Pjanic swap places. --Sam Marsden and Moises Llorens

play1:08Liverpool a model for dominance & consistency

European clubs could soon receive an influx of Japanese players after a leading agency signed a partnership deal with Coerver Coaching in the Asia Pacific region.

A raft of Coerver graduates have gone on to represent the Japan national team but the wider breakthrough of Japanese players into elite club level has been restricted to only a handful of players including Shinji Kagawa, Shinji Okazaki, Maya Yoshida and more recently, Takumi Minamino at Liverpool.

Family and Football plan to offer legal support, educational and contractual advice for players from the region looking to further their careers in Europe.

Coerver is a central hub for developing talent, having first arrived in Japan in 1993 and now with more than 20,000 children, predominantly aged between 5-16, attending sessions each week. -- James Olley