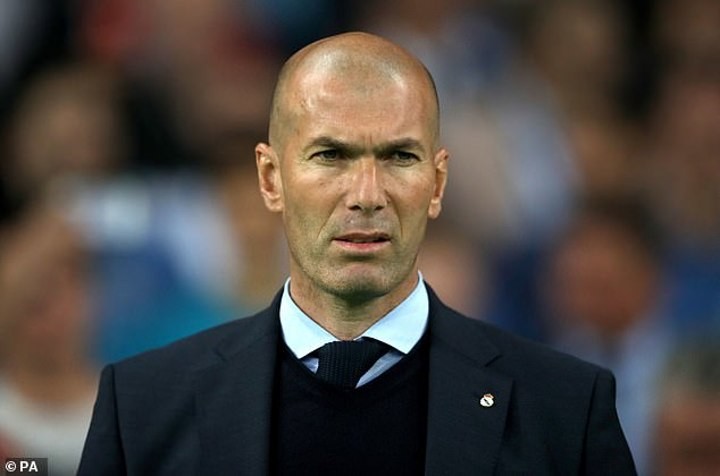 Real Madrid coach Zinedine Zidane will have plenty of decisions to make when this season finishes. A Diario AS poll run this week asked supporters who they would most like to let-go this summer.

Borja Mayoral (currently on loan at Levante) and Gareth Bale came out top of the list. Casemiro and Fede Valverde were bottom. But the most striking thing was that there were 37 players named.

That’s how bloated Madrid’s squad will be when everyone turns up for pre-season training, whenever that might be. If all the loaned players return and no-one leaves the situation will be unsustainable situation and Zidane will have to resolve it before the season begins. Sportsmail looks at some of the dilemmas.

When Zidane decided he didn’t want James Rodriguez in 2017 the club packed him off to Bayern but it was only a sticking plaster over the problem. Two years later he was back. He has barely played this season and the club will surely look to cut their losses this summer and move him on at a giveaway price.

His contract runs out in 2021 so anything they can raise in the market will be more than the free-transfer he will be at the end of next season.

Gareth Bale is in a stronger situation. His current deal runs until 2022 and he has said time and again that he wants to see it out. The problem last summer was that although Madrid coach Zidane wanted him sold the only club interested in matching his wages was Jiangsu Suning.

They were willing to put him on a salary in China close to global top earner Lionel Messi who earns £39m net. Madrid had indicated that they were happy for him to go anywhere after Zidane said it would be best if he left sooner rather than later in pre-season.

But they u-turned spectacularly when they realised they were not getting a substantial fee from the Chinese club. Zidane will doubtless reaffirm this summer his desire that the player leave and if the club give in on a fee and allow him to leave on a free then something could be worked out. He will want to play ahead of the 2021 Euros.

Martin Odegaard, 21, has played 28 of Real Sociedad’s 34 games and probably been their best player this season. Madrid definitely want him to end up playing for them.

The question is: When? He is ready to be a first team regular now: 25 of those 28 games for Real Sociedad have been full 90-minute performances. There is no point in him returning to be in and out of the side. It’s one of Zidane’s biggest decisions.

He called the midfield right last season allowing Dani Ceballos to leave so that Fede Valverde could begin to emerge. He will have another big call to make here. Toni Kroos will probably stay although at times his relationship with Zidane has been tense.

And Luka Modric is indicating that, aged 34, he wants to see out his contract until 2021 and then walk away for free. His form just before the shutdown was such that Zidane would be more than happy for him to do that.

But if Modric stays does that mean that Odegaard is better off spending one more year at Real Sociedad. He is happy at the club and has even bought a house in the area. He has waited a long time to reach the Real Madrid first team and he may feel that one more season on loan will not matter.

There is no way he will leave the club but he clearly needs competition, or help, or both. Eden Hazard aside, Madrid have avoided spending big on an established name for some time now. This feels like a position where they have to do exactly that.

If 19-year-old Erling Braut Haaland does arrive. Or if Madrid beat Barcelona to the signature of Lautaro Martinez. Or even if they move for Harry Kane, the new man will join Benzema and Zidane will then have to pick between Luka Jovic and Mariano Diaz as third choice.

Jovic has been disappointing in his first season but the club will not want to rush into cutting their losses on a player who cost 65m euros. The 22-year-old could go out on loan. Mariano wants to leave, although not on loan.

His goal against Barcelona reminded everyone how good his goals per minutes rate is. He will be 27 at the start of next season so he wants to find a club who will believe and invest in him.

WHAT TO DO WITH LOANS

As well as Odegaard, there are eight other players due to return from loan spells. All of them would have a claim to a place in the squad but there will not be room for them all to stay.

Achraf Hakimi, 21, is about to complete his two years at Dortmund. There have been seven goals and 10 assists in his 37 games played this season but Dani Carvajal is Real Madrid’s and Spain’s first choice right back so would Achraf play? On the other side left back Sergio Reguilon, 23, might have it even tougher.

His best chance of ending up as first choice at Real Madrid after his season at Sevilla was if Zidane left but it looks the French coach is staying and he favours his own signing Ferland Mendy. If Marcelo sticks around for another season then Reguilon would be coming back to be third-choice.

Dani Ceballos, 23, like Reguilon, needed a change of coach really. He doesn’t fit in under Zidane so he could try to lengthen his stay at Arsenal or return and find another loan club. There would be no shortage of takers in Spain with Valencia one club interested.

Young Japanese midfielder Kubo, 19 in June, has impressed at Mallorca but because of his age and the fact that he is not an EU player Madrid are likely to loan him out for another season.

Goalkeeper Andriy Lunin, 21, is in desperate need of games. He went to Leganes and Valladolid on loan and got no minutes. He’s had more joy at Oviedo. He might return if Alphonse Areola returns to Paris Saint Germain but it looks unlikely for now.

Oscar Rodriguez, 21, has scored some spectacular goals in his second year out on loan at Leganes. He has shown flashes of Madrid quality but competition in the attacking midfield position he prefers to play in is intense and a permanent return looks unlikely. He could be loaned out again or sold.

Striker Mayoral, 22, will almost certainly come back to be sold. In two years at Levante he has not been able to make a case for Madrid bringing him back to stay. Alvaro Odriozola, 24, was sent to Bayern in January. He will come back in the summer but only to go back out on loan somewhere new.

THE BOYS FROM BRAZIL

Vinicius was flying when the football stopped and will surely remain a fixture at the start of next season. Rodrygo Goes seemed to lose the faith of Zidane as the campaign went on but certainly did enough when he played at the end of last year to show he has the quality to be one of Madrid’s forward players.

If they both stay at the club with no loan move, as looks likely then the latest Brazilian to arrive, Reinier Jesus might have to go out on loan.

When he joined Real Madrid in January he went to play for the B-team but a Kubo-style loan to a newly-promoted (if there is such a thing) team might best suit him. He is only 18 and it looks far too early for him to be challenging for starts in the first XI.