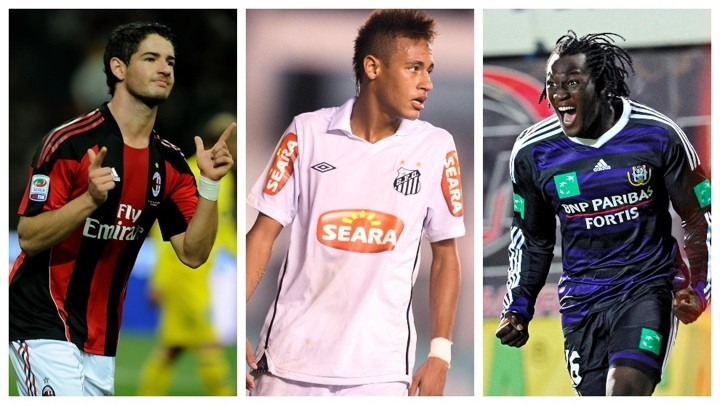 Football is cyclical, and the raft of talent that emerges from every generation is constant, albeit with differing individual characteristics and qualities, and it's interesting to look back on the 15 most promising under-21 players from the year 2010 and see just how their careers panned out.

This list has been based on players who didn't play in Spain in 2010.

He was the European Golden Boy in 2009 and was the most promising talent of the era.

The Brazilian joined AC Milan from Sao Paulo for a fee of 22 million euros, however injuries would eventually curtail his progress.

In a search to rediscover his form, Pato went to Corinthians, Villarreal and the Chinese Super League, however he now represents Sao Paulo once again.

Balotelli won the famed European Golden Boy award a year later in 2010, and many expected his career to hit incredible heights once he sorted his off-pitch antics.

However, 10 years later we're still waiting for the latter to happen and it's time to perhaps accept that we may never see the full genius that the Italian was capable of.

He enjoyed positive spells with Inter and Manchester City before moving to AC Milan and Liverpool. He is currently plying his trade for Brescia.

After signing for Tottenham Hotspur as a promising left-back in 2007, Bale is one of the true success stories of this list.

He developed into a truly elite winger, shining with Tottenham before joining Real Madrid in the summer of 2013.

His popularity in the Spanish capital may be waning slightly now, but he was an integral part of their Champions League dominance that started in 2014.

Discarded by Inter after joining the Nerazzurri as a teenager in order to make room for Paulinho, who didn't even join, the Brazilian midfielder went onto secure his status as one of football's elite playmakers with Liverpool.

His performances earned him a transfer to Barcelona worth well over 120 million euros, but he never adapted to replacing Neymar and is currently on loan at Bayern Munich, where he isn't a regular.

Tipped as the golden star of the 2010s, the Santos prodigy was heralded as the successor to both Lionel Messi and Cristiano Ronaldo.

His time with Santos was both sensational and controversial in equal measure - just ask Rogerio Ceni - but he did eventually sign for Barcelona in 2013 where he played his best football, forming a potent trident with Messi and Luis Suarez.

Neymar left for Paris Saint-Germain in 2017 for the biggest transfer fee ever in football (222 million euros), but his star has since faded due to injuries and his attitude off the pitch.

Lukaku's sheer physical frame and nose for goals caught the eye back at the start of the decade, with Chelsea signing him to replace Didier Drogba.

He never truly got a chance at Stamford Bridge and made his biggest impact on loan with West Bromwich Albion and Everton.

His performances on Merseyside tempted Manchester United to sign him for 90 million euros, but he only lasted two seasons before joining Inter.

Formed in La Masia, Dos Santos signed for Tottenham Hotspur in the summer of 2008 and it was seen as quite the coup for the Premier League side.

However, the Mexican never succeeded in England and his career spiralled downwards until he eventually found a modicum of success back in Mexico and the United States of America.

One of Bayern Munich's successful policies in the early 2000s was to loan out their elite talent to higher performing Bundesliga clubs.

Some might argue this increases the chance of facing competition in the league, but it developed players for a return to Bavaria.

Kroos was no different as he shone with Bayer Leverkusen before being an integral part of Bayern Munich's Champions League-winning midfield.

A dispute over salary and his value to the club led him to Real Madrid, where he has been a constant presence in multiple Champions League triumphs.

Shaqiri was seen as perhaps the most talented young player to emerge from Basel's academy ever, and in 2012 he earned a move to Bayern Munich after hugely impressive performances with the Swiss club in the Champions League.

It was a move which never worked out and he slid from club to club, eventually ending up with Stoke City.

It was there where he regained something close to acceptable form and was signed by Liverpool upon Stoke's relegation.

As Liverpool have improved, Shaqiri has received less and less game-time and a move is expected to happen once again.

Hopes were high for the Mexican in north London, although he is only remembered for scoring the latter goals in results already sealed in the League Cup.

His technical style of play never allowed him to break into Arsene Wenger's team and he was sold to Real Sociedad.

It was with the Basque club where he started to fulfil his potential, even being linked with a return to the Emirates Stadium as well as a transfer to Barcelona.

These deals didn't come to fruition and he is now the best player in MLS with LAFC.

Handed his Bayern Munich debut by Louis van Gaal, Muller burst onto the scene as the archetypal goalscoring centre-forward.

He was clunky in his movement, incredibly thin and he looked well out of place on a football pitch, until the whistle blew.

Muller's off-the ball runs were up there with the best German football has ever seen and his eye for goal was stupendous.

He looked on course to break Miroslav Klose's record for goals in World Cup tournaments, but age has taken its toll on the forward.

Muller is no longer a regular at the Allianz Arena, although he still remains with the club.

Initially, Jordan Henderson's promising career looked to have stalled when he signed for Liverpool in 2011.

The Anfield club signed him for a fee of 20 million euros at a time when they were really poor on the pitch and were hit and miss in the transfer market.

It took Henderson a while to settle, with the overriding opinion that he was a flop.

Several loan transfers failed to materialise, but the arrival of Jurgen Klopp has done wonders for his career.

The former Sunderland academy star is now a Champions League-winning captain and will lift the Premier League title when the 2019/20 season eventually ends.

Perhaps one of the more unfortunate tales on this list is the one of Federico Macheda.

Sir Alex Ferguson's habit of securing young talents whom few had heard of was one of the keys to his squad building and Macheda emerged in the most dramatic of scenarios.

With Manchester United chasing Liverpool down at the top of the Premier League in 2008/09, the Reds were set to drop two points in a 2-2 draw at home to Aston Villa - enter the Italian.

A sensational Cruyff turn and first-time shot curled into the corner of the net to hand United the vital three-points, and he would score again the week after against Sunderland.

However, he never again produced for the Old Trafford club and his career has seen him play for no fewer than nine clubs, eventually landing with Panathinaikos.

Whilst initially a star under Jurgen Klopp in Dortmund, the midfielder's career catapulted when he signed for Bayern Munich.

He then scored the winning goal in the 2014 World Cup final, however he struggled to establish himself at Bayern before re-joining his former club.

Gotze was then afflicted with a metabolic disease which almost ended his career, and he is now a squad player with Borussia Dortmund.

A player that often goes unremembered but was a technical marvel, Pastore wowed fans in Serie A with Palermo before he signed for PSG.

He was vital in his early years in Paris, but the vast income of stars after that put him further and further down the pecking order.

Pastore signed for Roma in 2018, but in the 2019/20 campaign he has played only three league matches.