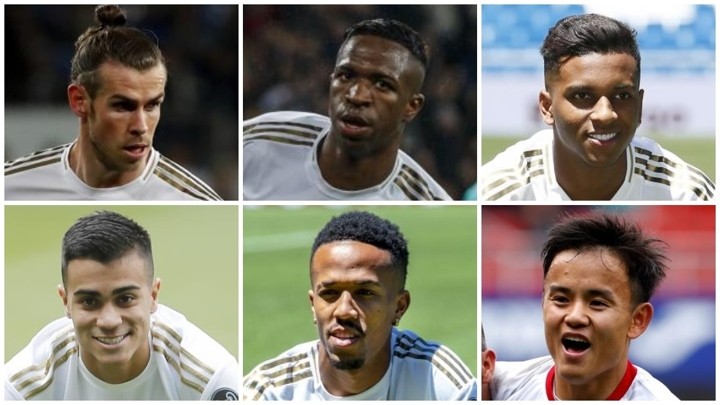 Zinedine Zidane will not only have to trim down his Real Madrid squad by 12 in the summer, with Los Blancos set to have 37 first-team players, but there will have to also be decisions made about the club's non-EU players.

In the 25-man squad, Real Madrid will only be allowed three non-EU players, however they will have to decide who occupies these spots out of Vinicius Junior, Rodrygo Goes, Eder Militao, Reinier Jesus, Take Kubo and, from 2021, Gareth Bale.

The reason for Bale's non-EU status coming into effect from 2021 is due to the United Kingdom leaving the European Union as part of Brexit.

This season, Real Madrid have had Vinicius, Rodrygo and Militao as their three non-EU players, with Reinier having joined Castilla and Kubo having gone on a season-long loan to Real Mallorca.

During pre-season this summer, though, the five of them will have to fight to be included in Zidane's final squad, while Bale will add to this headache from January 1, 2021.

From Real Madrid's perspective, they hope that they will be able to find a buyer for Bale, not only because he is not in Zidane's plans but also because of this non-EU issue.

As MARCA said at the time, what is envisaged is that there will be a transitional period until December 31, 2020, with players able to keep their current status in Spain, but the ruling by FIFA and UEFA regarding non-EU players will still apply to the Welshman.

Yet, given the coronavirus crisis that has taken over Europe, it doesn't seem likely that an agreement that usually takes years to reach will now be achieved in record time.

So, if Real Madrid are unable to sell Bale (he has no intention of leaving), there will be a big problem.

Militao, thanks in part due to his position, is guaranteed to be included as a non-EU player, so the other two spots would likely be filled by Vinicius and Rodrygo, the three players who did so this year.

The first of the foreign players to obtain a Spanish passport will be Vinicius, but, as MARCA have been assured by sources, he will have to wait until the summer of 2021.

With the current situation regarding the coronavirus outbreak, it doesn't seem likely that there will be an acceleration of this process.

As such, if Bale ends up staying and is named in the first-team squad, the three players who would seem to be affected most by this are Rodrygo, Reinier and Kubo.

In Rodrygo's case, despite his young age and the fact he has many years ahead of him at the Estadio Santiago Bernabeu, it is striking that he could be loaned out after he cost 50 million euros and was Real Madrid's second-top goalscorer in the first half of the season.

Reinier's situation is also striking, with the midfielder having cost Los Blancos 30 million euros. Although, having said that, a loan move may not be the worst thing for the 18-year-old as the coronavirus crisis has truncated his adaptation to Europe.

The one for whom it seems almost impossible to play at Real Madrid next season is Kubo.

The Japanese playmaker is unable to apply for dual nationality and, therefore, his best option is to go on another loan spell and perform at a level like Martin Odegaard has at Real Sociedad before coming back to the Bernabeu.

An issue that works against Kubo is that he arrived for free, so there is not the pressure with him that there is with the likes of Rodrygo and Reinier.

As soon as he begins to display his potential on a regular basis, Kubo will benefit Real Madrid with his sale.