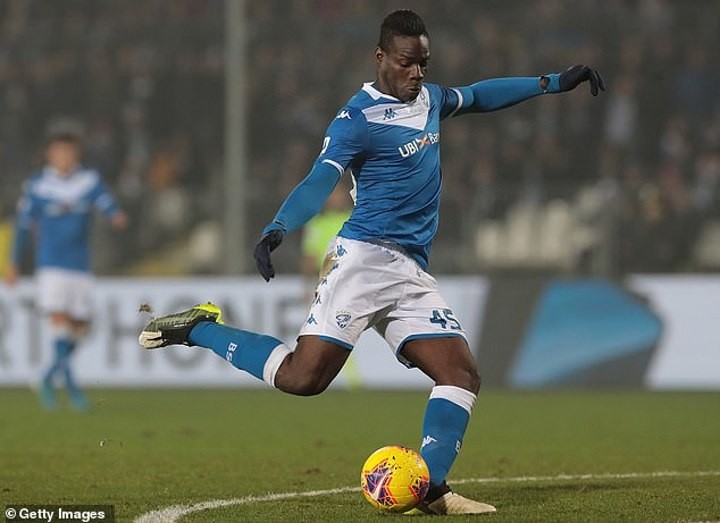 There is one certainty when it comes to the future of Mario Balotelli; his short-lived spell at Brescia is coming to an abrupt end.

Instead of living out the dream homecoming it was built up to be, the 29-year-old has been forced to endure a nightmare at a dysfunctional club that has failed to show him any meaningful support in the wake of yet more racist abuse.

The fractured relationship between Balotelli and the club's incendiary owner Massimo Cellino has finally shattered during the Serie A pause, brought on by the outbreak of the coronavirus pandemic.

In an interview with the BBC World Service, Cellino spelled out exactly, from his point of view, what had gone wrong.

'He doesn't show up to training, he doesn't look very committed let's say, for the future of the club,' he said. 'That's the problem.'

'Balotelli apparently doesn't like to stay in Italy any more because he's not acting that way.

'I think we both made a mistake.'

The accusations about training were strenuously denied by Balotelli. 'How can you write that I am not training on the pitch?' he said on his Instagram story. 'I didn't think I was a ghost, invisible to the cameras.'

In truth, the former Manchester City striker would be forgiven for feeling invisible.

Not once, but twice in Serie A this season, Balotelli has been the victim of racist abuse from the stands – once in Verona, and once in Rome, against Lazio.

Against Hellas Verona, Balotelli punted the ball into the area of the ground where he had heard the abuse, and had to be pleaded with by team-mates and opposition players to remain on the pitch.

At least, during the delay, his fellow professionals showed their support. The same could not be said for the club's fans, or owner.

Astonishingly, supporters branded their own centre forward 'arrogant' for his protests, while Cellino attempted to play down the situation with a racially-charged joke.

Such was the extent of Balotelli's disillusionment with situation that his aptitude in training evaporated, boss Fabio Grosso sending him home from one session after just an hour.

All of it has served only to underline that fact that this is a club where Super Mario no longer feels at home. He is in search, once again of a new project.

While his stats in Italy's top flight this season were not particularly eye-catching – he managed just five goals for the side rooted to the bottom of the table – he has proved himself time and again to have the ability.

That point was recently forced home by his former Liverpool boss Brendan Rodgers.

At fewer clubs has Balotelli failed to hit the heights his talent promised so spectacularly than at Anfield.

His goalscoring record in the Premier League amassed to one solitary strike against Tottenham, before he was shipped out on loan to Milan the following season and then on to Nice for nothing when his contract expired.

Despite his dismal spell on Merseyside, Rodgers was keen to stress the player's obvious gift.

'It was pretty clear to see that, strikers I've always worked with, Mario Balotelli didn't fit my style. But one thing I will say about Mario is that he has all the talent, and he genuinely has,' he told the Beautiful Game Podcast.

'He should be one of the top three strikers in world football. He has everything. It's the difference between talent and working talent. It was just unfortunate he'd come in when Luis [Suarez] had left.'

While his ability in front of goal is undoubted, there remain questions over his attitude. Questions that have seen bigger clubs swerve the opportunity to take a chance on him over the last few years.

No longer is Balotelli a name linked with Champions League clubs across Europe. Instead, back waters and far-flung destinations appear the limited options available to the player represented by super-agent Mino Raiola.

In Europe, it is clubs in the Turkish Superlig that are still willing to take a chance on one of football's greatest enigmas – with failure to establish himself in England, Italy or France not enough to yet put off the likes of Galatasaray.

There are option in the MLS, too. Clubs in the US have always been open to luring big names across the pond, and Balotelli would signify a major coup for any club, especially for an international still the right side of 30.

Toronto FC have been linked with him, but they will not be the only ones.

There is also interest in Brazil. It was thought that Flamengo were on the cusp of luring the forward to South America before the opportunity arose last summer for Balotelli to move back home.

There is a chance the reigning Copa Libatadores champions could be back in for him, while Vasco de Gama have also been credited with an interest.

With Raiola in charge of plotting his future, Balotelli will certainly not be short of options.

One thing is for certain however, he won't be staying put.