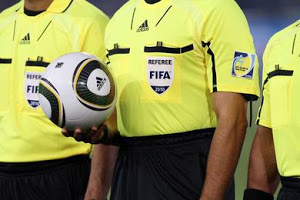 Class One referee Anthony Mensah and his assistants Stephen Alhassan and Philip Quansah nearly met their untimely death at the Swedru Park on Monday afternoon after they were subjected to brutal beatings.

The cause of the beaten has not been easily identified but the referee was forced to abort the game which was twelve minutes away from regulation time.

The game which was forced to an abrupt end had New Edubiase in an advantageous position as they were leading by a lone goal.

Supporters of the home team unceremoniously jumped onto the field, pounced on the center referee and his assistants, and subjected them to brutal beatings as if they were pick-pockets busted in the middle of a market.

The referees run all over the field with the fans chasing them to hand them more while the few policemen at the center looked on helpless.

God eventually bestowed mercy on the helpless referees when the police had reinforcement to rescue them.

According to the Match Commissioner of the game, A.S.K. Annor, one of the assistant referees was being pelted with stones and sachet water by the home fans which compelled him to run to the center to report to the center referee.

He further explained that while the assistant referee run to the center referee, the fans broke the inner perimeter and pounced on all the officials after over-powering the security officials at the venue.

"The assistant referee was pelted with stones and sachet water, he picked one of the big stones to show to the referee and the fans broke the inner perimeter to attack all the officials.

"The police called for reinforcement to rescue as and we had to rush the injured referee to the hospital," he told GHANAsoccernet.com

They, however refused to continue the game insisting they had to leave to seek for medical attention as the center referee’s face was oozing blood.

The game was therefore brought to an abrupt end.

Striker Stephen Manu BA had shot the visitors ahead in the first half after pouncing on a rebound from an Alhassan Nuhu shot.

The game which was originally scheduled to be played on Sunday was rained off after a heavy downpour.