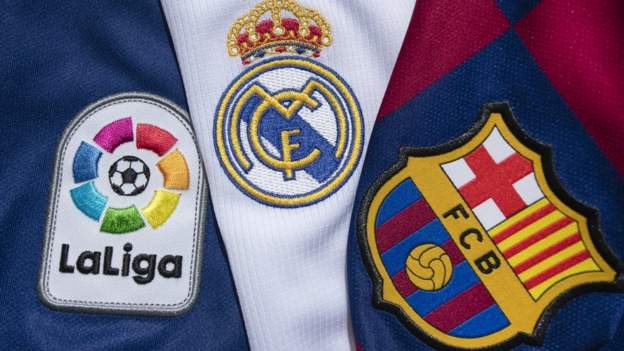 Both clubs were notified on 25 November of the Spanish top flight's plan for an emergency meeting to discuss proposed changes to competition regulations.

The two clubs said they would not send representatives to the 7 December event.

Barca and Real were two of the 12 founding members of proposals in 2021 for a European Super League (ESL).

Those initial plans collapsed after a fan backlash but the two Spanish clubs, along with Italian giants Juventus, are yet to formally abandon the project for a breakaway league.

Last month, Real president Florentino Perez has reaffirmed his club's commitment to an ESL and said football does not recognise that the game in its present form is "sick".

In a statement on Wednesday, Madrid described the proposed meeting by La Liga as an "illegal" summons.

"It is totally unjustifiable to address in this improvised and urgent way, without the appropriate debate and calm analysis, relevant modifications of the internal regulations of La Liga," said the clubexternal-link.

"It is completely inappropriate and deeply inconsistent for La Liga to commit the economic waste of displacing more than 100 people to carry out an act of this nature, on these dates, to the United Arab Emirates, when it could be held at the La Liga headquarters without incur extraordinary costs."

Meanwhile, Barca saidexternal-link: "FC Barcelona's position has always been that of reaching consensual agreements after having examined the issue coherently and respecting all positions.

"For that reason, we do not believe it is the right time to travel to Dubai for an event which could well take place at La Liga's headquarters and once again we show our opposition to any form of action that we consider damaging to the rights and interests of FC Barcelona."

When Louis Theroux met Bear Grylls: Did he find the real man beneath the tough-guy exterior?She scammed the world, then vanished: The 'Cryptoqueen' who persuaded millions to join her financial revolution