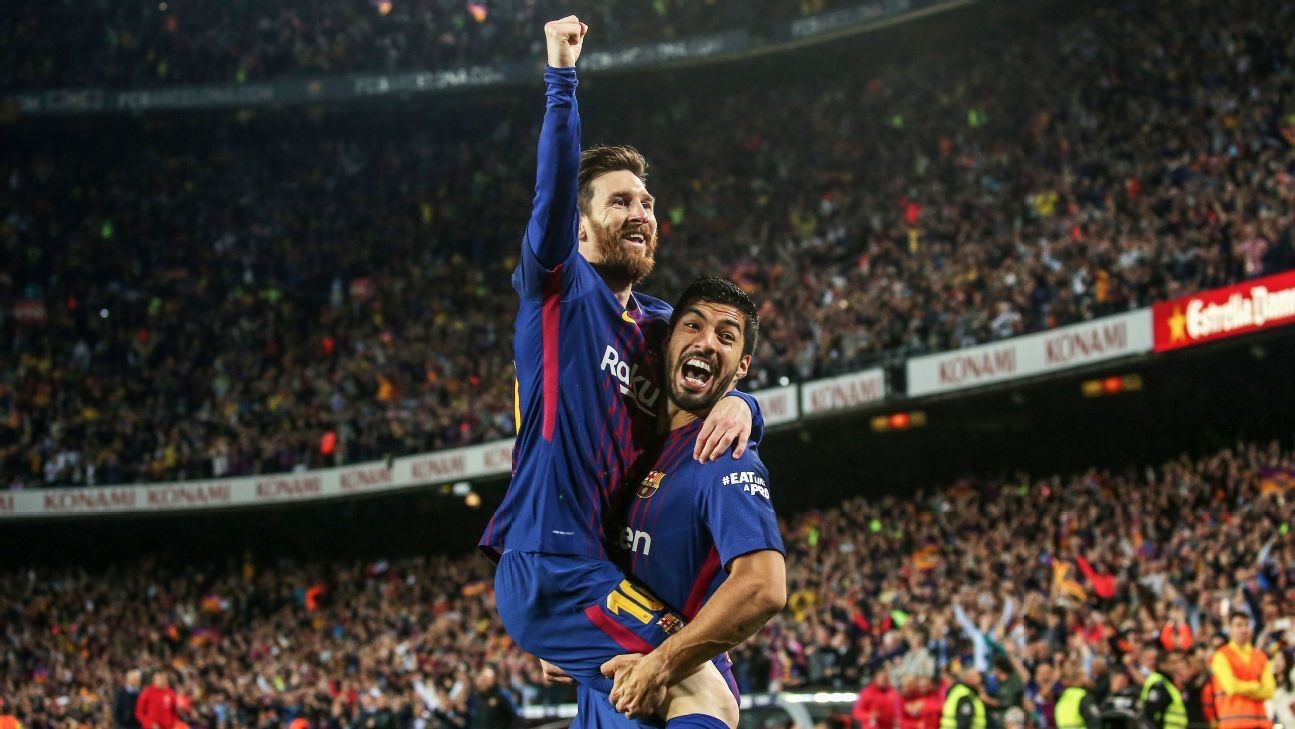 Luis Suarez has said Barcelona must do better if they want to convince Lionel Messi to extend his contract at the club beyond the end of next season.

Messi, 33, has a deal at Camp Nou until 2021 but a report in Spain this month suggested he was considering not renewing his terms when they expire.

Sources subsequently confirmed to ESPN that he is angry with Barca's front office about leaked reports that appeared to make him responsible for certain events at the club, such as the January sacking of coach Ernesto Valverde.

- Human foosball: How to play soccer and stay socially distanced

Messi, sources added, is also frustrated about the squad's lack of quality and Suarez says Barca must strive to improve the team around him to ensure he doesn't walk away for free next summer.

"What he would like is a winning project, an exciting project," Suarez told Mundo Deportivo. "But it's a situation that he has to manage with his family and, in this case, with his dad, and be conscious of the decision he has to take."

Barca president Josep Maria Bartomeu is expected to resume talks with Messi's father, Jorge, who is also his agent, over a new deal in the coming months. Bartomeu said recently he's confident the forward will renew.

Suarez stopped short of making any such guarantees, adding that only Messi will know what is best for him.

Barcelona obliged to renew Messi contract - pres.Will Messi leave Barcelona? If so, would he leave for Argentina, MLS or a team with Ronaldo?

"I don't see Messi playing for any other team," Suarez said. "Leo will take the decision based on what's best for him and with his family in mind. Being his friend, I would always recommend that he plays where he feels comfortable and happy.

Messi's frustrations may have been heightened since La Liga's restart last month, with Barcelona's two-point lead over Real Madrid becoming a four-point deficit with just two games to be played.

"Winning La Liga is almost impossible from here," Suarez conceded looking back at the six-point swing. "We must be self-critical. If we miss out on the title, it's because we've let it escape."

Madrid need just two points from their final two games and will be crowned champions for the first time since 2017 if they beat Villarreal on Thursday.

Barca will have another chance to finish the season on a high when the Champions League resumes next month. They face Napoli in the round of 16 at Camp Nou on Aug. 8 with the score level at 1-1 from the first leg.