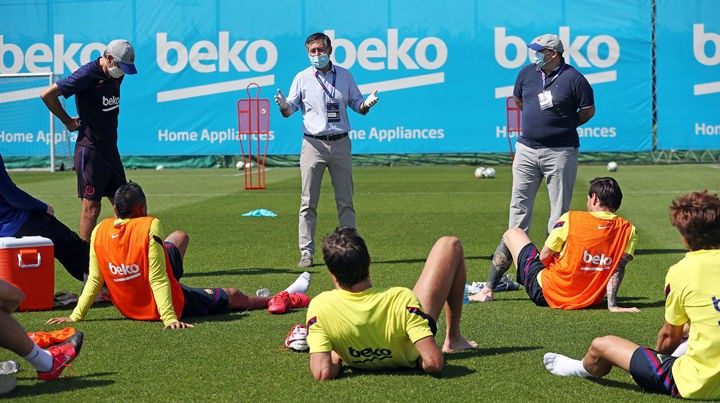 "Physically they're all made like bulls." This phrase is attributed to Barcelona manager Quique Setien, surprised and enthusiastic at the same time about how his players returned to training after two months of confinement.

Fifteen days after the return to work, and without the chance yet to do actual team shape work (last week they training groups of 10), the coaching staff are feeling good.

Setien transmitted as much to president Josep Maria Bartomeu when he visited training over the weekend. One thing is to have a good feeling, another thing is the science and the analytics. And there are no doubts there, either. Everything tested since the players' return (weight, muscle mass, recovery capacity, anaerobic fitness etc etc) has returned much better results than expected. Much better than July at the start of preseason.

The players have taken advantage of the lockdown to work harder than ever at their respective homes to stay in shape and ready for the return of LaLiga.

To give two names, Gerard Pique has lost weight, while Lionel Messi has returned at motivated as ever. Setien admitted to those close to him that the players were close to maxing out in March, with injuries, an accumulation of games and mental tiredness, and that the break could have done them good.

The players have recharged their batteries and have ambition in their eyes. They're hungry for trophies. The coach has told Bartomeu and his closest friends that his players are capable of winning La Liga and going the distance in the Champions League.